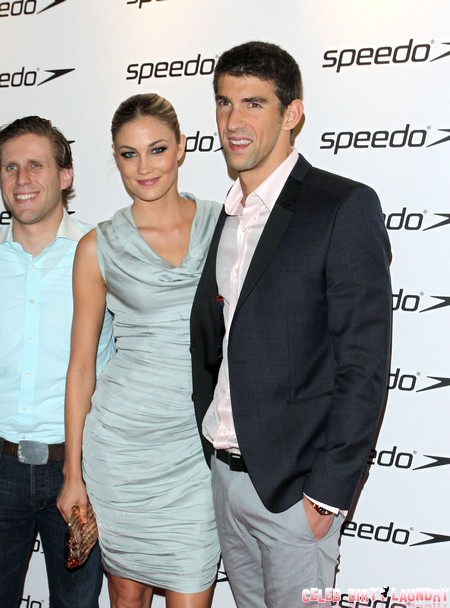 Imagine George Clooney and Stacy Keibler split up by another man!  George is famous for loving and leaving women, treating them like property, and generally being a total douche, albeit a charming one. Stories about George and Stacy have gone from ‘breaking up’ to ‘making up’ to ‘getting married’ over the past few months and the truth remains obscure.  Well now Shelby Loosch at GLOBE has laid the smackdown on George by revealing that Michael Phelps may be moving in on Stacey!

Michael is the most decorated Olympian in history and his mamma, Debbie Phelps, wants another prize for her darling boy.  This prize comes in the form of statuesque former professional wrestling star and aspiring Hollywood starlet, Stacy!  According to Loosch, Mama Phelps can’t stand Michael’s current babe, Megan Rossee, a cocktail waitress and aspiring actress.  Mama sees Debbie as a gold-digging floozy who is just using Michael to get ahead – and she’s probably right.

Mama Phelps wants Michael to get with Stacy and dump Megan.  Debbie sees her son and Stacy as having a common background, both of them being athletes, and would welcome Michael and Debbie dating. A source reports, ‘Debbie keeps crossing her fingers and would welcome Stacy into the family with open arms!’

Wouldn’t that be great, seeing Stacy dump that pompous short guy with the big head who is old enough to be her dad? Okay, Michael ain’t good looking but he sure is rich and very much in demand – plus he is young and healthy.  At least with Michael Stacy won’t need to be looking for a boytoy quite as soon as she will with withering old George.