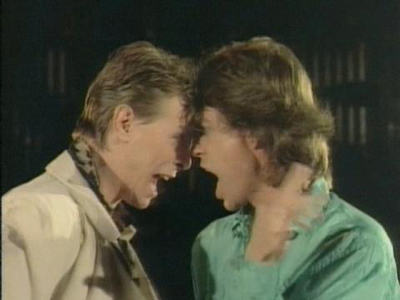 The following gossip rumor about Mick Jagger and David Bowie may plant a visual in your head that you will never be able to un-imagine, so continue reading at your own risk!

According to RadarOnline, there have long been rumors that the two aging rock stars once shared a penchant for steamy, gay “sexcapades,” and a new, controversial book is confirming that the two did embark on a homosexual love affair during the 1970s.

Reportedly, Christopher Andersen, the author behind Mick: The Wild Life and Mad Genius of Jagger, claims that David and Mick’s relationship turned physical shortly after they met each other, even though they were both married and notorious womanizers. Related: Angelina Jolie Was A Cutter Addicted To Heroin While She Was Dating Mick Jagger

Shockingly, David’s wife, Angie Bowie, supposedly even once walked in on the two together in bed:

“By October 1973, the Bowies were living on Oakley Street, just a stroll from Cheyne Walk. Angie had been out of town for a few days when she returned home one morning and went straight to the kitchen to make some tea. The Bowies’ maid, who had arrived about an hour earlier, approached the lady of the house with a peculiar look on her face. ‘Someone,’ she told Angie, ‘is in your bed.‘

“Angie went upstairs to her bedroom, slowly pushed the door open, and there they were: Mick Jagger and David Bowie, naked in bed together, sleeping. Both men woke up with a start. ‘Oh, hello,’ said Bowie, clearly taken by surprise. ‘How are you?’“

Pulitzer Prize-winning literature, this is not, but it isn’t exactly the first-time we’ve heard these kind of gay sex scandal rumors about a supposedly straight celebrity, now is it?