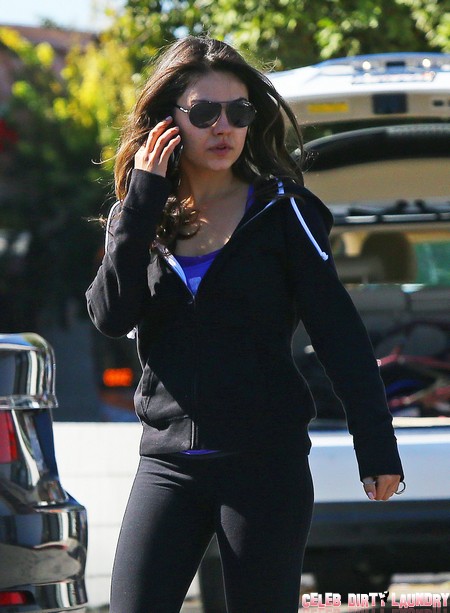 Mila Kunis has taken a bit of heat recently, with all the tabloids claiming that Ashton Kutcher is thisclose to dropping her ass- because it has gotten too fat.  Let’s face it, this guy is a douche bag and he was married (kind of) to a skeleton in Demi Moore so it’s easy to see him commenting on Mila’s noticeable weight gain. The pressure seems to be on and Mila was spotted leaving a Pilates class, obviously trying to regain the body she had before.

There is speculation that even Christian Dior is having a real issue with the actress’ bulking up. They liked her skinny skinny, the size that she was after filming The Black Swan. You know, when she was dizzy all the time and ready to pass out!  Mila has spoken openly about hating the bony body that she had to maintain for that film and how happy she has been to gain back some weight and celebrate looking like a woman again. However in Hollywood, everyone wants to hire a stick and Mila is beginning to feel the heat of that.

If she were smart she’d be dropping Ashton rather than a few extra pounds that make her look healthier anyway!  I don’t get her choices in men. I have to wonder if Mila is one of those women that always is sacrificing herself in order to try and save her man.  Every guy she’s linked to is either an addict or a clear cut dirt bag. Obviously she is drawn to the broken kind, which is a damn shame!

Will dropping those extra pounds really make Mila’s relationship better? Sure she can change her body, but then what the heck is Ashton going to change to improve himself for her? Tell us your thoughts below!