Miley Cyrus IS Honey Boo Boo – Find Out Why! 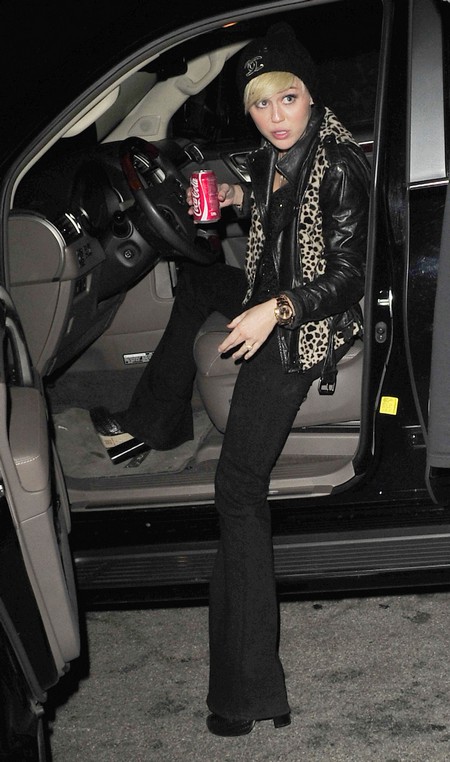 Miley Cyrus’ speaking voice sounds like one of those anonymous I-was-a-drug-dealer episodes with the blacked out face and the halo silhouette. You know what we’re talking about? Those late night stories of how a drug dealer survived a SWAT team’s attack and now he smells like onions in prison? The lighting is done in such a way that his face is not shown, but you keep thinking to yourself, “What if someone recognizes his profile?” Miley is one of those people. No, not a drug dealer without ankles, but a deep voiced anonymous persona made in Disney heaven.

Her father shot to fame back in the mid-90’s with “Achy Breaky Heart”. The song took over the airwaves, made line dancing popular with cannibals in New Guinea, and gave heartbroken women a reason to cry into their cheap, fermented wine. Billy Ray Cyrus became as popular as Ronald McDonald and Monica Lewinsky. From 2001 to 2004, Cyrus starred in “Doc”, a soft-focus doctor drama about, uh, doctors? However, in March of 2006, Hannah Montana debuted to an international Disney audience and Billy Ray’s daughter took over the achy breaky reins. She became one of the most popular celebrities in the pre-teen/mid-teen market.

Today, Miley Cyrus is an international celebrity to be reckoned with. She is a multi-million dollar recording artist, a film star, and Liam Hemsworth’s boss fiancé. There’s one little flaw in the whole Miley Cyrus persona – she adores Honey Boo Boo. We’re all for undisciplined and egotistical families becoming reality television superstars, but what makes Miley adore the little kid made in cutesy heaven? They’re the same person. No, Honey Boo Boo is not Miley’s doppelganger! Sheesh, what do you take us for? We’re not a science fiction site!  Honey Boo Boo, the Windows 7 version of Miley, is quickly climbing the ladder to superstardom, but unlike Miley, Honey Boo Boo isn’t using beauty to get ahead in the game, she’s using her man-child quips. Miley, on the other hand, is like a nervous breakdown waiting to happen, edging closer to the pinnacle of madness with each passing day.

So, why does Miley adore Honey Boo Boo? They’re the same person, yes, but what makes this so unique is that both of them experienced fame at a very, very young age. Miley sees her young self in the cute kid, and her fame whoring father in Honey Boo Boo’s Mama Boo Boo. Miley’s hillbilly roots are planted firmly in the backyard of Honey Boo Boo’s house, sans June Shannon’s gnat-eaten feet.

Could Miley Cyrus actually be a grown-up Honey Boo Boo? Could her seemingly anonymous (and ever-changing) persona be a product of fame and fame whoring? What does this say about the future of Honey Boo Boo? Will she be able to overcome the pitfalls of fame? Will she become a second Miley? How long will Boo Boo’s fame last? One thing is for certain, we hope they don’t appear as old drug dealers, without ankles, on a “What Happened To?” television special. Until then, we’re stuck with Miley’s EVP voice and Honey Boo Boo’s quips.

What do you think? Do you think Honey Boo Boo is a younger version of Miley Cyrus? Let us know in the comments below.