Miley Cyrus On Ex Nick Jonas: “My Life Is Ruined Because He Doesn’t Love Me Back” 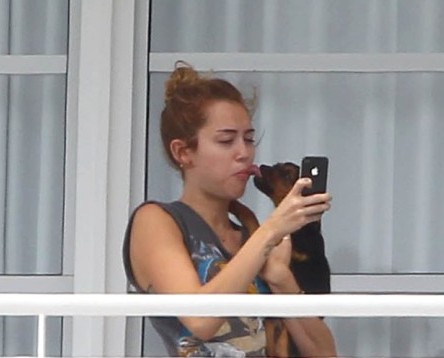 Miley Cyrus reveals that first love, Nick Jonas, wanted to control her and made her feel like she wasn’t pretty or good enough to date him.

Two thousand and seven was the best of times and the worst of times for the teen queen. Before there was Justin Bieber and Selena Gomez, there was Nick and Miley. The baby-faced pair hooked up at the height of their Disney fame in their early teens and had the unfortunate pleasure of filling the gaping Disney sweetheart void devastatingly relinquished by Britney Spears and Justin Timberlake. And like most young romances, it was cataclysmic and earth shattering… until it wasn’t anymore. The couple called it quits leaving the pop princess alone and deflated.

“I was so sad. I just went into this weird funk. And I dyed my hair black. When we were dating, Nick wanted me to get highlights – and so I did that, and I got myself looking great,” Miley told Amanda de Cadenet on her Lifetime show. “And then, on the day we broke up, I was like, I want to make my hair black now – I don’t want to look pretty; I want to look hard-core. I was rebelling against everything Nick wanted me to be. And then I was like, I’ve got to be by myself for now, and just figure out who I really am.”

But despite the soul searching, Miley said her self-confidence plummeted.

“That was what love was to me. I was in love with somebody. I was in love with this person that I thought was perfect, and so amazing and so when you get your heart broken that’s all you see: The rest of my life is ruined because he doesn’t love me back,” she explained. “He doesn’t think I’m pretty, then I’m not pretty. He doesn’t think I’m worth his time, I’m not worth anyone’s time. That kind of thing. So I think just remember that ‘this too shall pass’ and it’s not the end of the world … You got to keep going. It’s generic, but it’s true. It’s a big something to remember.”

Ultimately, Miley did keep going and hooked up with the relative unknown co-star of her movie, The Last Song, Liam Hemsworth. And Miley’s never looked so happy, although she’s still fending off those pesky weight rumors.

Despite the rumors, Miley has a good, albeit lollipop-looking, head on her shoulders. I think people secretly want her to pull a Britney and start stabbing umbrellas at paparazzi but I don’t see that happening anytime soon. She kind of reminds me of Gwyneth Paltrow – she only dates actors on the upswing. Gwyneth got Brad Pitt in his hot heyday; Luke Wilson in the fresh, Wes Anderson hysteria; Ben Affleck after Good Will Hunting and Chris Martin when Coldplay was still considered indie rock. Miley snagged Nick in the height of Jonas Brothers mania and is currently dating one of the most in demand young actors in Hollywood. Now, all she needs is 1995 Gwyneth-type movie offers and she’ll be all right.