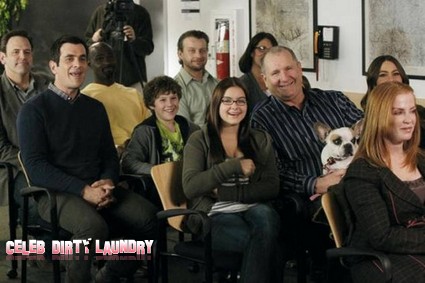 Tonight is a whole new episode of Modern Family and you have to tune in.  In the tonight’s episode ‘Little Bo Beep’ 2-year-old Lily drops an F-bomb, at least it appears she does. Gasp……. the Parents Television Council are not happy about it.  The show has been asked to pull the scene but so far ABC has not responded.

Do you watch Modern Family, I do,  I love the message that families come in all shapes and sizes. On last week’s show poor Phil wanted help with a seminar and didn’t get it because Claire was too busy being competitive against her dad over Manny and Luke’s school project. Did you miss the episode, if you did you can read our recap here!

On tonight’s show the family helps Claire prepare for her upcoming televised debate with Duane Bailey for the town council seat, but will they do more harm than good? Lily is going to be a precious flower girl for the first time, but the problem is she’s just discovered her first expletive and Mitch and Cam don’t know how best to deal with this new parenting test. And Jay is very concerned with Stella’s recent strange behavior and puts the blame on Gloria

Stay tuned we will be covering the show with all the up-to-the-minute details tonight, so don’t forget to stop by at 9PM and refresh often to get the newest updates.

Claire is running for office and their is an article in the paper that describes her as angry and unlike-able. Phil has the paper and notices the article, he tries to hide it from Claire, but too late, she has seen it. At home, Phil tells her to lose the snippy attitude and “the look” and maybe they won’t write things like that about her.

Mitch receives a box and is so excited that it is for Lilly, it is a new dress.  Cam is not crazy about the dress because it lights up.

Jay gets home and is looking for Stella, his dog, Gloria asks why she doesn’t get treated like that and he says he will greet her the same when she starts meeting him at the door and wagging her tail. Stella falls into the pool and Jay runs in, with his clothes on. Gloria can’t believe how much attention the stupid dog is getting.

Claire does a mock interview for the family, trying to change the way she acts, she stutters and is sarcastic, they are all giving a real hard time until Claire walks out and Phil declares she is ready.

Cam and Mitch are teaching Lilly how to throw petals from the basket and both think all eyes are going to be on her, when she blurts out a curse. They are trying to pretend that she didn’t say it, maybe she said duck or luck and not f*uck.

Phil takes Claire to a debate and she is surprised at last minute to find it is televised.

Jay and Gloria arrive for support, they bring Stella because jay thinks she is going to commit suicide.

Mitch and Cam sit down with Lilly and Mitch can’t keep a straight face every time she says it – they both tell her to stop saying it. Cam threatens to take away all her toys, he’s afraid she is going to say the word at the wedding.

The next day, Gloria is dressed for the wedding and Stella decides to jump in the pool – nobody is there to rescue the dog, so Gloria jumps in, completely ready in her gown.

At the wedding, Lilly lights up but doesn’t speak, Mitch and Cam explain that she is on verbal lock down because of the “f” word.

The bride walks down the isle, her dress as well as the whole bridal party, lights up to match Lilly. Mitch starts to cry because everyone looks so beautiful and right there at the front of the altar, Lilly blurts out “Daddy don’t cry, f*uck off”.

Jay has bought a life vest for Stella and she jumps in the pool and heads right to the filter, her squeaky toy was inside, that is why she was jumping in the pool, not to commit suicide.