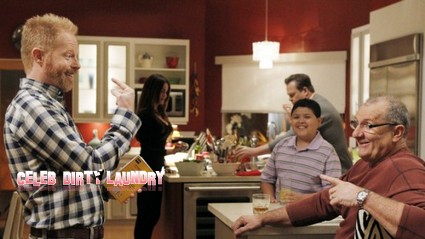 Tonight is a whole new episode of ABC’s Modern Family and it is called ‘Me? Jealous?.’  Stand by, we will be live blogging the show at 9PM tonight.  In the last episode ‘Little Bo Beep’  the family helps Claire prepare for her upcoming televised debate with Duane Bailey for the town council seat, but will they do more harm than good?

Lily was going to be a precious flower girl for the first time, but the problem was she discovered her first expletive, she dropped an F-bomb, at least it appeared she did.  The Parents Television Council were not happy about it.  If you missed the episode you can read our official recap.

On tonight’s show Phil is so preoccupied with impressing his new business partner, Tad (Greg Kinnear), that he doesn’t notice what Claire believes is Tad being overtly inappropriate with her.  Meanwhile, Jay and Gloria let Mitchell and Cameron stay over while their house is fumigated, and it turns out four is a crowd.

Modern Family airs tonight at 9PM EST on ABC and we will be live blogging the show with all the up-to-the-minute details.  Make sure to come back and spend the evening with us!  Refresh often to get the most current info.  While you wait for the recap check out the sneak peek video below of tonight’s episode!

RECAP: Phil and Claire have Phil’s new business partner, Tad, over for dinner and when he is leaving, he kisses Claire on the lips. Claire felt that he lingered, but Phil didn’t think anything of it.

Meanwhile, over at Jay and Gloria’s house, they are sharing breakfast with Mitchell and Cameron who are staying over. Mitchell has a meeting with Booker Bell, Jay knows he’s a famous radio personality and wants to meet him so Cameron suggests he heads over to meet him.

Mitchell is at his meeting with Booker Bell and Jay walks in and makes himself comfortable. Booker gets up, he has a phone call, Mitchell tells Jay to leave because he is interrupting. When Booker returns he asks where his stalker is gone and is a little disappointed.

Ted invites Claire and Phil to his house for dinner, but Claire doesn’t want to go because she feels that Ted is hitting on her.

Gloria arrives home after a girls day out, she’s bought Lilly and her matching jackets. Meanwhile, Cameron rearranged the whole kitchen and Gloria is not that impressed.

Phil and Claire arrive at Ted’s house and he tries to greet Claire by kissing her on the lips again but she ducks and he misses.  Ted’s mom and the kids leave, he kisses them all on the lips and says goodbye.

Meanwhile, in the kitchen, Gloria can’t find anything and has to keep asking Cameron where everything is. Lilly comes into the kitchen with a gift, she and Gloria bought him and matching apron, leopard print, the same as their jackets.

Jay is playing pool and Mitchell comes in and apologizes. Jay tells him there is no need, then he gets a phone call, his car was stolen. He tells Mitchell that he may need a lawyer, the two head out the door and Booker Bell is there, he and Mitchell pulled a prank on him.

At Ted’s house, he is telling jokes and Phil is getting jealous that he is making Claire laugh. Phil ends the evening abruptly and Claire tells him that he is jealous, she is turned on and feels special by it.

At home, Phil and Claire find Luke all dressed up as a girl, “Betty Luke”, Haley and Alex dressed him up and put makeup on him.