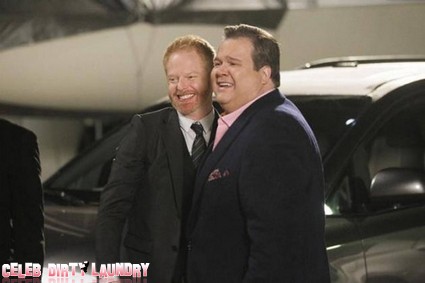 Tonight is a whole new episode of ABC’s hit show Modern Family and it is called ‘’Leap Day’  and it is being aired on a leap day.   Stand by, we will be live blogging the show at 9PM tonight with all the up-to-the-minute details.   On last week’s episode it was a day of disturbing realizations when Mitchell manages to ruin one of Jay’s proudest golf moments, Phil overhears something that may forever change how he sees his little girl, and Gloria stumbles upon Claire’s dangerous little secret.  If you missed the episode you can read our official recap here!

What are you thinking of this season’s show?  Sound out in the comments below and let us know your thoughts!  I am really enjoying it!  Last week’s show was not as strong as some of the others – but still a great show!

On tonight’s show it’s a day of disturbing realizations when Mitchell manages to ruin one of Jay’s proudest golf moments, Phil overhears something that may forever change how he sees his little girl, and Gloria stumbles upon Claire’s dangerous little secret.  Phil has Leap Day plans – he announces to everyone: “I love Leap Day.”  Claire lets everyone know that Leap Day is “a kind of a big deal” in the Dunphy house.

It also happens to be Cameron’s birthday on February 29th.  Since his birthday only happens every couple of years his partner Mitchell feels like he is under pressure to make it the perfect birthday.

RECAP: Phil is so excited that it is leap day that he wakes up the kids early very excited. Meanwhile, Gloria thinks leap day is very stupid. Jay found another shirt that the housekeeper turned pink. Cameron is happy it’s leap day because he was born on this day and tells Mitchell that he is therefore ten years old.

Mitchell catches Cameron snooping through his bag, he wants to know if he has planned anything for his birthday. Mitchell finally confesses that he is just having a simple party. The surprise is actually a Wizard of Oz themed party.

Claire is watching tv and she is crying while watching tv, meanwhile Alex and Haley are really grumpy and Phil realizes that the three of them are on their period together on the day he most loved that has not turned into the day he most dreads.

Gloria is at a bar watching a game with Jay when she almost gets into a scuffle with a guy and Phil intervenes, calms the situation down but Gloria is disappointed that he didn’t do more.

Mitchell is making all the plans for the party when Cameron gets home unannounced. He tells Mitchell that he wants to be in touch with his family today because a month ago they were hit by the worst tornado in history. Mitchell is freaking out, here he went and planned the party and Wizard of Oz is about a tornado.

Luke tells Phil that he is not feeling that well, he is just acting and it makes the girls back out of their day together. Manny has had enough of the grumpy women and he’s heading home. Phil leaves and Claire keeps Luke back because she thinks he doesn’t feel well.

Manny gets home and tells Jay he didn’t go trapeezing and doesn’t want to discuss it. Jay confides in him that he thought Gloria wanted him to fight the guy in the bar.

Gloria admits that she wanted Jay to fight the guy, but she needs to learn how to be calm like him.

Phil comes back home, he pretends that he forgot his glasses because he wants to take Luke with him trapeezing. He gives him fake blood and instead of dabbing his finger, he spills it all over himself and Claire figures out what is going on. Luke tells her that Phil wanted to take him trapezing without all the women because they were all “monsterating”.

it’s time for Cameron’s party and it’s a boat party, Mitchell changed all the plans. Everyone walks to get on the boat and there is a strong stench that is bothering all of them. The captain approaches Mitchell and tells him that on 2 hours notice, he can’t take 30 people on the boat, he will have to drop a couple of people because it is a safety issue. Cameron is shocked that Mitchell plans the party two hours ago. The captain turns to Gloria and Jay thinks he insulted her, then the captain calls Jay grandpa and Gloria punches him in the face. Phil finally loses it front of the women, he tells them he was on an emotional roller coaster all day and can’t take it with them any more, they hug him.

Mitchell tells Cameron the truth, that he planned a Wizard of Oz party and Cameron tells him he is upset because it’s his tenth birthday party. Mitchell tells him he is not ten, he is forty and Cameron breaks down. Mitchell fells bad because all Cameron wanted to do is be ten. Phil and the family head over to the trapeze and Phil gets his wish. Meanwhile, Cameron gets to go on a ride with Mitchell and act like he is ten. Cameron had the best 10th birthday party ever.

That’s it for tonight’s show and for another leap year.