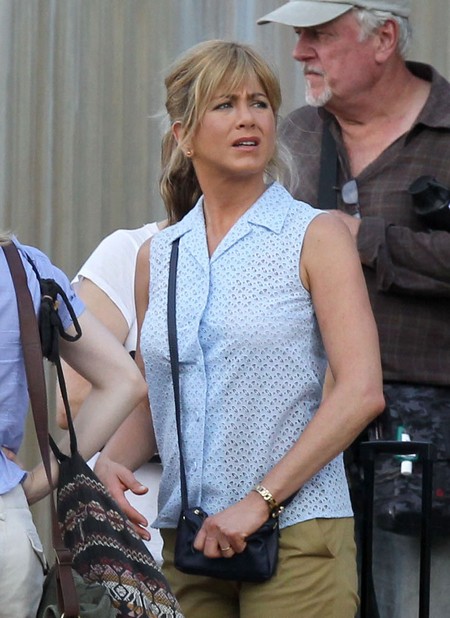 Jennifer Aniston went on television in February of this year and finally admitted to Conan O’Brien that she had had plastic surgery. Not that any of us had ever doubted that Jen had had tons of cosmetic/plastic surgery, just that it was interesting to hear her admit it. Of course on Conan she focused on the laser peels she’d needed to remove her ‘sunspots’ and not all the other work she’s obviously had done over the years. We didn’t hear about her multiple nose jobs, for example.

Recent photos of Jen show that she has either gone in for some more serious plastic surgery or she is packing on the pounds… or both!  Jennifer’s face appears puffy and bloated – exactly like the face of someone who’s had lots of Restylane or Perlane injections into her cheeks and facial folds, according to celebrity plastic surgeon Dr. Michael Fiorillo.  Jen looks bloated and as Star Mag so eloquently put it ‘her usually streamlined features and chiseled jaw lines seem to have disappeared underneath new chubby cheeks and jowls.’  Don’t you just love Star – I know Jennifer does.

Of course it is also possible, as Star suggests, that Jen has not been to see her cosmetic surgery team but is trying out method acting.  This would entail her fattening up for her role as an over-the-hill slatternly prostitute in We’re the Millers.  This of course is so unlikely since Jen can’t act anyway and would NEVER jeopardize her appearance for anything as unimportant to her as being believable in a movie role. But the implication that Jen looks the part for her role as a burned-out prostitute is just a classic!

Star Magazine Print Edition, August 13 reports: Is it method acting and method eating or something else? Jennifer Aniston sporting a frumpy, field-out face for her new film role.

Nicole Kidman won an Oscar in 2003 by wearing a fake hooked nose as writer Virginia Woolf in The Hours. A year later, Charlie Theron earned the trophy by sporting bad teeth and skin as a serial killer in Monster. Is it Jennifer Aniston’s turn to take an unglamorous run at Academy Award gold?

That seems unlikely, as her latest comedy, We’re the Miller’s (now filming in North Carolina), in which she stars as a dowdy prostitute hired to play a pot smuggler’s wife, probably won’t make any film critics top-ten list. But there’s no denying that Jen’s face has undergone a fleshy transformation over a few short weeks.

But if Jen, 43, has purposely gain the weight for this role, it’s a smart career move, an insider tells Star. “She’s at the point where she has to realize she can play the glammed-up hottie forever. If she’s comfortable in his unflattering part, and made herself look less attractive for it, it makes Jen seem more human, and more likable, in the process.”

There’s also the possibility Jen’s fuller face could’ve been caused by a medical procedure. After looking at her recent photos, NYC-based plastic surgeon Dr. Ramtin Kassir speculated she may have gotten some facial fillers injected.

“She seems overfilled,” Dr. Kassir tells Star. “She now has wide, puffy cheeks and a less pronounced jaw line. It seems to have changed the contour of her face.”

Jennifer is a celebrity who somehow turned a successful run on a TV sitcom into a lucrative, although not critically acclaimed, film career. Her marriage to Brad Pitt was another miracle and losing him to Angelina Jolie cemented her A-list status.  Still, to me Jennifer Aniston has never had a performance I could stand to watch.  She exemplifies the modern ethos in which success has replaced talent and virtue as the standard by which we judge. 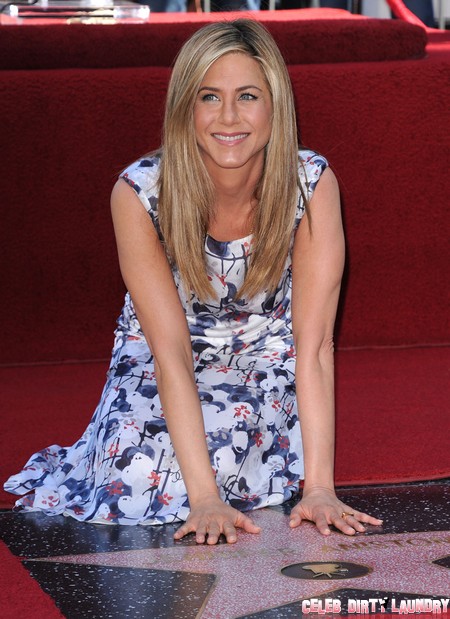