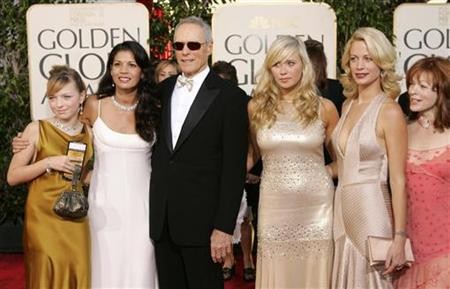 Tonight Clint Eastwood and his family join the “Reality TV” craze with their new show, “Mrs. Eastwood & Company”.  Now if you are looking to see a lot of the legendary actor in this show, then you are going to be disappointed because it will focus primarily on the lives of Mrs. Eastwood (Dina) and her daughters, 19-year old Francesca and 15-year old Morgan.

This show is going to be more about the “woman behind the man” when it shows us how Dina can juggle a career as a music manager, motherhood, wife and rescuing animals??

Now, one could believe that Diana is simply doing this show to promote a boy band that she discovered in Africa, but nah, she wouldn’t be that shallow, would she?

In the season opener, Dina’s girls want to get their belly buttons pierced and to discourage them, Dina wants to get hers done first to show them how horrible it is. Wow, what a great mom sacrificing herself for her daughter! (I’m joking, this is probably the dumbest thing I have ever heard)

Francesca’s feelings for a band member come into play when she does something that she regrets. Will this affect her relationship with her boyfriend, celebrity photographer Tyler Shields?

SPOILER: Upcoming episodes will show a lot of tears and an angry Dina when she declares an all out war on someone. Will it be someone in the family or maybe Francesca’s boyfriend?

With the season opener only hours away, poor Clint Eastwood is worried that his family will become famewhores like the Kardashians! What do you think, is it possible for the Eastwood family to stoop that low?

There’s only one way to find out how all this plays out, come back for our full awesome recap when we will be live blogging the show.