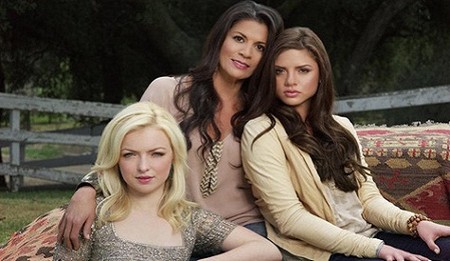 Over the course of the 10 episodes, the family will travel from their home in Carmel, California, to Los Angeles, with the promise of a few tiffs between 15-year-old Morgan and her mother, an inside look at the relationship of 18-year-old Francesca with her 29-year-old boyfriend, and the inner-workings of Overtone.

We will also follow the story of  a six-man vocal group called Overtone, Dina discoverd in South Africa.   Moved by their talent and star-potential, she re-located all six young musical men to Carmel, California and has been acting as their mentor, mother and manager ever since.

Rumor has it that papa Clint Eastwood will appear on the premiere tonight, but don’t get excited he will only be on for about 75 seconds and does not say much.  What do you think, can the Eastwoods give the Kardashians a run for their money.  Hit the comments and let us know your thoughts!

We will be live blogging the episode with all the up-to-the-minute details so make sure to come back to this spot and watch the show with us.   Make sure to refresh often so you get the most current info!  While you wait for the episode you can catch a sneak peek of tonight’s episode and some SPOILERS here!

RECAP:  Dina is from Carmel and has two daughters, 15-year old Morgan and her step daughter, 18-year old Francesca who just got an apartment in West Hollywood. Morgan tells Dina that she wants to get her belly button pierced but Dina doesn’t like the idea because she knows that Clint is going to freak out. Dina’s brother Dominic comes by and for the first time the family is meeting his new son, baby Jackson.  Francesca is not thrilled about Jackson, she doesn’t like babies.

Morgan is not giving up on the belly button issue, but Dina doesn’t want her to do it. Emile asks Francesca if she has a boyfriend, but she won’t tell.

The housekeeper, Lisa, is feeding their pet pig, basically Dina takes in any animals that need a home. Dina confides in Lisa about the belly button ring and wants to make the whole ordeal to be uncool. Lisa suggests Dina get it done herself, then Morgan won’t want to have it.

Francesca is with her boyfriend Tyler, he is an amazing photographer and she is so in love with him. Domenic asks Francesca if she is pregnant and she says no, then tells him that she doesn’t like kids.

Lisa and Dina are at the tattoo shop, Dina gets to show off her fit body on the table while she gets the piercing. Once it’s done, lots of flat tummy poses in front of the camera. Now it’s Lisa’s turn, she gets her nose pierced.

Tyler is at lunch with Francesca and he tells her that he photographed a baby, Francesca tells him that she just doesn’t like babies period. Tyler is shocked, this is crazy, he hopes it doesn’t hinder their relationship.

Dina and Lisa go meet Morgan and show off their piercings, Morgan is shocked and tells Dina that she ruins everything for her.

Meanwhile, Tyler convinces Francesca to change Jackson’s diaper and finds that she is enjoying it, Tyler is thrilled and thinks she will make a good mom.

At the end of the day, Dina wants the belly button ring to come out, Lisa takes it out and there’s blood, Morgan is disgusted and realizes that she no longer wants one. Lisa pulls out her nose piercing and they all have a good laugh about it.

The next day at lunch, Tyler tells Dina that Emile called them last night and asked if he used protection with Francesca. Tyler’s answer was that yes, he has guns and swords in case they get attacked by ninjas.

Dina is in LA with her band, Overtone, they are going to meet with a producer and Dina is really excited because it’s been a long road with a lot of hard work.

One member of the band, Eddie, is openly gay with the band but questions that if he “comes out” will it be the right thing for the band or the wrong thing.

Eddie and Francesca talk about his being gay and he tells her that Emile doesn’t want him to “come out”.

Everyone is getting ready for dinner, Client hasn’t been home in a while and they are all getting together. At dinner, Dina calls on Morgan to look for Clint because he’s not at the table. Clint arrives and kisses Dina and the girls. Dina shares with everyone that Eddie is not going to come out of the closet, Client doesn’t know what the big deal is, Eddie should do what he wants, it’s nobody’s business.

The next day, Dina gets a call from Emile, he tells her that he woke up to find graffiti on his car. Meanwhile, Francesca can’t believe that Dina is upset because it was just a joke. Lisa tells Dina to calm down, nothing to do now because it is already done. Dina tells Francesca that she needs to apologize.

Later on when Dina and Lisa are alone, she tells her that she thinks Francesca has a crush on him.

Francesca meets with Emile for lunch and she tells him that Eddie is upset that Emile doesn’t want him to come out of the closet. Emile tells her that he felt he was supporting him and didn’t realize that Eddie was upset. Emile can’t believe that he didn’t see this, Francesca realizes that she misjudged Emile. Francesca confesses to Emile, he tells her he kind of thought it was her and then asks if she had a crush on him. Francesca admits that she had a crush, Emile tells her that he considers her to be his little sister.

At the Overtone’s home, they are in the middle of practice when Emile arrives to speak to Eddie. He tells him that if he wants to come out, then he should, he supports him. They both make up and everyone feels better.

At the Eastwood home, Francesca tells Dina about her lunch with Emile and Dina confesses that she told Emile she had a crush on him. Meanwhile, Morgan starts painting their faces with mascara.