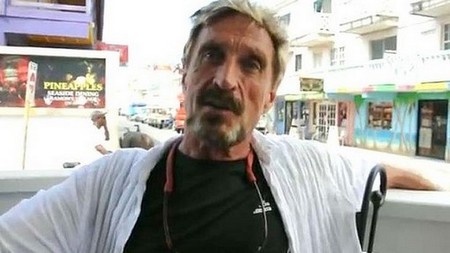 The man behind one of the biggest anti-virus software programs in the world, John McAfee, went viral yesterday when he was confirmed as a prime suspect in an ongoing murder investigation.  The Belizean police force’s Gang Suppression Unit released an official statement, “On Sunday the 11th November, 2012 at 8:00 a.m. acting upon information received, San Pedro Police visited 5 3/4 miles North of San Pedro Town where they saw 52 year old U.S National Mr. Gregory Viant Faull, of the said address, lying face up in a pool of blood with an apparent gunshot wound on the upper rear part of his head apparently dead. Initial investigation revealed that on the said date at 7:20 a.m. Laura Tun, 39 years, Belizean Housekeeper of Boca Del Rio Area, San Pedro Town went to the house of Mr. Faull to do her daily chores when she saw him laying inside of the hall motionless, Faull was last seen alive around 10:00 p.m. on 10.11.12 and he lived alone.

“No signs of forced entry was seen, A (1) laptop computer brand and serial number unknown and (1) iPhone was discovered missing. The body was found in the hall of the upper flat of the house. A single luger brand 9 mm expended shells was found at the first stairs leading up to the upper flat of the building. The body of Faull was taken to KHMH Morgue where it awaits a Post Mortem Examination. Police have not established a motive so far but are following several leads.”

Purportedly, according to the National Enquirer, Gregory Faull – the murder victim – filed a complaint against the 67-year-old McAfee claiming he “fired guns and exhibited roguish behavior”. McAfee moved to Belize after his company experienced extreme setbacks. McAfee Anti-virus software used to be the most sought after anti-virus software in the world, but many smaller anti-virus companies set up shop during the early 2000 internet boom. Currently, one of the hottest and biggest selling anti-virus programs in the world belongs to Avast! – a Prague based anti-virus company that offers free (and up-to-date) software to consumers. As of 2009, McAfee’s company’s worth plummeted from a staggering $100 million to a mere $4 million– one of the biggest internet industry losses of the decade.

McAfee’s life has not only been filled with severe financial losses, but he has also been a bit of an amateur drug lord during his time on Belize. According to a RadarOnline report, McAfee had been experimenting with MDPV, or in other words, bath salts – the only drug that had brought us a pubic hair away from the zombie apocalypse. McAfee began posting on a Russian-hosted drug forum called Bluelight. He used the pseudonym “stuffmonger” and chronicled his attempts at creating a “super perv powder” strain of the illegal substance.

Allegedly, McAfee tested the drug on himself after he created it in a makeshift lab. He wrote, “I’m a huge fan of MDPV. I think it’s the finest drug ever conceived, not just for the indescribable hypersexuality, but also for the smooth euphoria and mild comedown.” He warned potential users about the dangers of MDPV, saying he “had the worst paranoia” of his life. McAfee didn’t seem to stop his drug experimentation after his bad trip, as he even described to users on the forum the best method of administering MDPV, namely rectal insertion, “Measure your dose, apply a small amount of saliva to just the tip of your middle finger, press it against the dose, insert. Doesn’t really hurt as much as it sounds. We’re in an arena (drugs/libido) that I navigate as well as anyone on the planet here. If you take my advice about this (may sound gross to some of you perhaps), you will be well rewarded.” MDPV is currently banned in the United States, but still remains legal in Belize.

Self-experimentation of hallucinatory drugs is one of the most sought after ways to manipulate a specific drug and turn it into a best seller. Back in 1938, Albert Hoffman synthesized LSD (Lysergic acid diethylamide), and in 1943, Hoffman accidentally absorbed a small amount of liquid through his fingertips. If it weren’t for Hoffman’s accidental discovery and post-discovery self-experimentation, the drug known as LSD would not exist today. Unfortunately, whilst LSD users claim it has potential positive effects, there’s nothing positive in the usage of MDVP.

McAfee went from hero to zero in a matter of years. The murder investigation is focusing solely on McAfee as the prime suspect, which usually means that the police have enough leads to track him down as the murderer. Do you think he could have done it? Do you think it was McAfee in the hallway with the gun? Let us know your thoughts in the comments below.