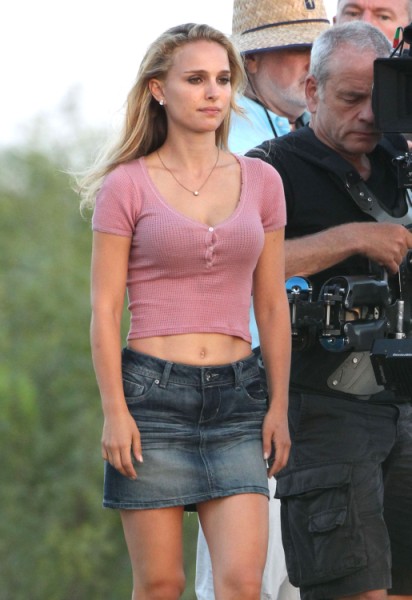 Natalie Portman’s been sexy as all hell and very un-Natalie on the set of her new Terrence Malick film in Austin, Texas. She’s been sporting some hot blond hair and flashing a nice pair of boobies all over co-star Michael Fassbender’s face. By the grins he’s been sporting on set, I’d say he doesn’t mind one bit. But what’s Natalie’s secret? Is the new perky pair thanks to Victoria’s Secret, modern science or little Aleph Millepied? Let’s take a look, shall we?

I’m a degenerate for sure but Natalie’s one of my all time faves so she has to understand this is coming from a place of love. Better me than some other pervert who hasn’t seen or appreciated Where the Heart Is. But I’m up in the air on this one. I think they’re real thanks in part to that 16-month-old baby of hers. But wouldn’t they have gone down by now? Let’s assume she breastfed, since she’s a vegan earth mother. Boobs wouldn’t still have that lift and volume, right? Ladies with children, help me out.

I have to believe in the push up bra. My girl wouldn’t get fake jugs, right? Natalie Portman is an Oscar winner. She’s a Harvard grad. She’s Queen Amidala and Queen Amidala would never get a boob job. There’s no reason to. Anakin only had one good hand to feel with!

So, in conclusion, I have to say Natalie’s new vixen look is the result of some nice padding, slutty clothes, and perhaps a baby that’s still on the tit. People usually stop at a year but I know a couple people who kept on going til a year and a half and Natalie just seems like one of those people. But do you think this new look is worth keeping? Is Natalie checking herself out in the mirror and thinking, “Hey, this is actually pretty fun!”? Most women (see also: Real Housewives of Orange County cast) look like they could topple over with their melons and small frames but Natalie actually looks pretty proportional. I could see her liking the change. But I hope she just invests in more of these bras. Natalie can’t get a boob job. It would be just too hard for me to wrap my head around and our bond is tenuous as it is ever since she married the French ballerina.

What do you think of the Natalie Portman/boob job pics? Real or fake? I also posted a pic of her before the baby so you have something to judge against.