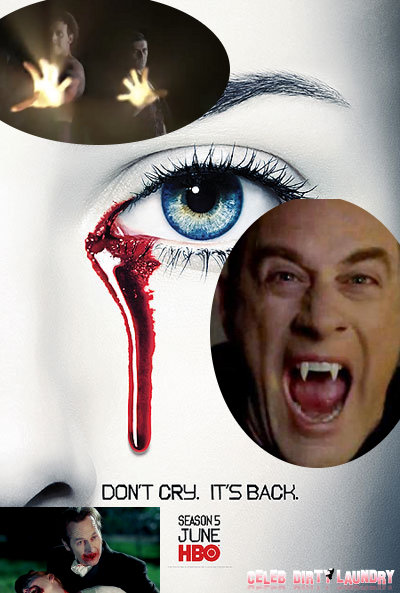 True Blood season 5 is coming at us quicker than Jason Stackhouse can say the alphabet and, with a newly released trailer, we couldn’t be more excited! The new trailer, which aired just before last night’s completely EPIC episode of Game of Thrones, gives us an awesome amount of footage that will get any Truebie’s blood pumping, pumping, pumping!

We’re two weeks away from the premiere, and I think it’s safe to say that this season is not only going to be incredibly badass but also incredibly dangerous for the characters we’ve all grown to love, hate, and fear.

I’m not quite sure if everyone, including our dear southern lass Sookie, has mentally prepared for the return of Russell Edgington, the three-thousand-year-old vampire who was “supposedly” done away with a couple of seasons ago. Well, whether you’re ready or not, Bon Temps, he’s back and HUNGRIER than ever.

Not only is Russell hungry, he is also very pissed off — for a multitude of reasons. He was “killed” (that tends to get people borderline distraught); Eric, out of vengeance, completely annihilated his lover; and, oh yeah, he hates the mortal world and all authority.

We’re incredibly excited to see what becomes of Russell’s character arc. Wonder how long the Vampire Authority will put up with his antics? Do you think the Vampire Authority will align itself with Russell and *GASP* turn on the mortal world — to assert their dominance, power, and superiority? We’ll just have to wait and find out. This is when I jump up and down like a small child and scream: I just want to know what happens!

This promo — gawd it’s so fantastic! — features scenes with Tara, Sookie, Bill, Eric, Pam, Jason, and others, including the newly unveiled Vamp Authority himself, Roman. Christopher Meloni will be the face of the Vampire Authority and, as you’ll see in this clip, he conveys all the things we like to see in a semi-ambiguous antagonist.

The new season of True Blood debuts on June 10th on HBO. Let us know what you think of this new video!