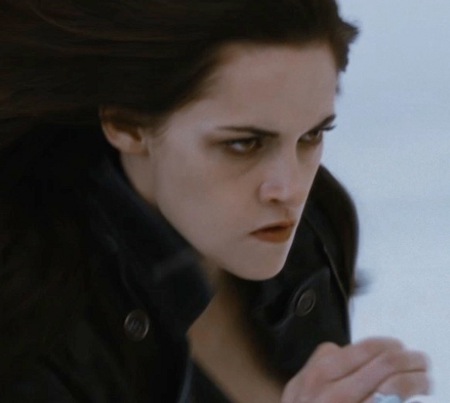 If you happened to catch the 2012 MTV Video Music Awards, then chances are you caught a glimpse of the new Twilight: Breaking Dawn Pt. 2 movie. If you’re a Twihard and you can’t wait to sink your fangs into the new movie but you missed the VMAs, don’t worry! We’ve wrangled up the super epic vampiric awesomeness for you to enjoy, and we’re very eager to know what all you hardcore fans have to say about the final installment in this popular series.

The film follows Bella Swan (Kristen Stewart) who, at the end of the previous film, was turned into a vampire after birthing a half-human half-vampire child. I guess that’s just one of those NBD situations, right? Well, no. After the Volturi, the baddest of all asses in the vampire world, hear about Renesmee’s existence, they’re furious and go after the child. Edward Cullen (Robert Pattinson), Bella, and her new vampire family rally to protect the child and form alliances with all sorts of vampires — they’ll even be getting some help from the werewolves. As you’ll see in the clip, Jacob (Taylor Lautner) says, “We’ve never been afraid of any vampires.” *Woof Woof Woof* Good thing you’ve got those puppy dogs on your side, Bella!

The ending of the film has apparently been changed a bit; in other words, it won’t necessarily coincide perfectly with Stephanie Meyer‘s ending. They’ve also beefed up the film with a lot more action — epic action. That’s basically all the trailer consists of: action. We’re anxious to see what you think, so check it out. The trailer runs for about 1.5 minutes and contains scenes that have been featured in old trailers as well as a few new teasers that have never been released before. Enjoy! Edward and Bella Lovers 4 Evahhh! Except in the real world.