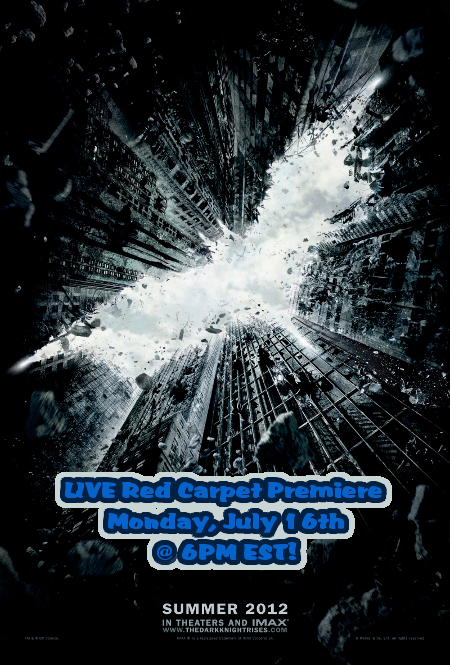 Tune in on Monday, July 16th for the red carpet premiere of The Dark Knight Rises! The premiere is quickly approaching, but not quick enough for some people, especially those hardcore comic book fans who want nothing more than to see how one of the world’s most-loved vigilantes fares against one of his toughest opponents yet . . . himself!

Sure, he’ll be facing Bane and will have to deal with Catwoman’s shenanigan’s, but, as is the case with all heroes over the course of their journeys, Batman will undoubtedly come at odds with himself: Who am I really? What am I doing? Am I making a difference? Am I worthy enough to wield power? It’s these questions — those that force a masked hero to contemplate his or her own identity — that Bruce Wayne will have to cope with.

So, what can we do in the meantime while we wait for the July 20th release? We can tune into a super spectacular LIVE stream  of the red carpet event before the movie’s worldwide premiere, that’s what we can do! NowLive has partnered with Warner Bros. Pictures for the world premiere of the epic comic-book inspired film.  And guess what? CDL has the premiere for you right here. You know we do whatever we can to hook you up with only the latest, greatest, and fanciest red carpet parties.

These movies have been wildly successful and I have a feeling this one is going to do astronomically well at the box office . . . . I’m excited to see what kinds of records this film smashes. Are you looking forward to this new Batman adventure? Make sure to come back here on Monday to check out the LIVE red carpet premiere. We love parties, especially when you’re there!

P.S. Please bring the popcorn — we tend to burn it.