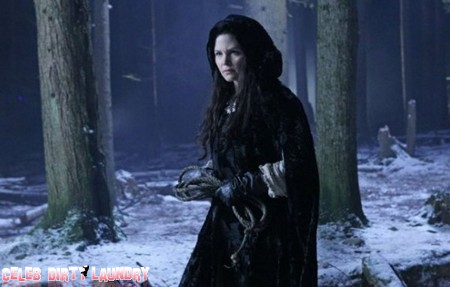 Tonight is a whole new episode of ABC’s hit series Once Upon A Time called ‘Heart Of Darkness.’  On last week’s show called Red Handed it was all about giving us some background about Little Red Riding Hood and the Big Bad Wolf.  At the end of the episode there was a big bombshell – Emma found a box containing a human heart and testing will tell her who the heart belongs to.   Does it belong to Katherine, David’s wife who is missing?

I automatically assumed David would be someone implicated but there is a big problem… the prints on the box are Mary Margaret’s!!!  Oh No!  Regina really wants to get rid of Mary Margaret is this her plan?? If you missed the episode you can read our full recap here!

On this week’s episode Mary Margaret hires Mr. Gold as her attorney when Emma is forced to arrest her for the suspected murder of David’s wife, Kathryn. Meanwhile, back in the fairytale land that was, Prince Charming sets out to stop a determined and unhinged Snow White, whose memory is still clouded by Rumpelstiltskin’s potion, from assassinating the Evil Queen.  This is sure to be one of my favorite episodes – any time Rumpelstiltskin/Mr. Gold is featured it is always a great episode.  He is my favorite character on the show.  What do you think, are you loving Rumpelstiltskin as much as I am??

We will be live blogging the show with all the up-to-the-minute details at 8PM EST so make sure to come back to this spot and watch the show with us. While you wait for the recap you can watch a sneak peek video of the episode here!  Make sure to refresh often to get the most up-to-date updates!!

RECAP: Tonight’s episode begins with Prince Charming and Red riding through the woods when they are attacked by the kings men. Red sends James off while she changes into the wolf to kill the King’s men. James takes off to look for Snow White.

Meanwhile in Storybrooke, Emma is booking Mary Margaret and taking her suspect picture. Emma has to question Mary Margaret who is feeling slighted and railroaded.

Back in Fairytale land Snow White is trying to kill the lovely little singing birds by the killing them. Grumpy is upset because since Snow White drank that potion she seems to be very different, almost angry.

The dwarves have brought Snow White to an intervention to tell Snow that something is wrong with her and she a very nasty person lately. The potion is what made her forget the Prince. Snow White is very angry about her family being killed and she is taking it out on her friends. She agrees and decides that she will take it out on The Evil Queen. Grumpy tries to stop her but she is not listening.

Emma, Mary Margaret and Regina are in the questioning room because Regina wants to make sure this is done fairly. Emma begins to question her about where the box with the heart was found. It was found by the bridge where Mary Margaret used to meet David. Emma shows her the box and turns out it is Mary Margaret’s jewelry box. Regina of course is trying to convict Mary Margaret right away. Emma asks Regina to come outside of the room and she tells her that she is the one doing the questioning, not Regina!

In Fairytale land Snow White lassos one of the Queen’s men. She is looking for information about where the queen is and threatens to kill the man if he doesn’t give her the information. He is soo scared that he gives her the info but she ends up hurting the man anyway. She steals the armor from him to get into the castle to kill the Queen. Grumpy comes up and tries to reason with her and helps her not to make a major mistake. He wants to take her back to Rumplestiltskin so he can bring her back. Grumpy believes he is the most powerful man in the world and can do anything.

Storybrooke, Emma is checking their apartment to see if someone broke in to steal the jewelry box. Henry comes in and Emma tries to send him back to school but of course he refuses. So he is helping her with theinvestigation. Henry thinks his mother Regina is the one to blame for Mary Margaret being framed. All of a sudden they hear a noise from the heating vent, Emma lifts it and finds a dagger wrapped up. Oh no!! not good for Mary Margaret!

Henry is sitting at the diner with a hot chocolate when August comes in and talks to Henry about his teacher being arrested. August tells him he needs to find the answer in the book. August believes that the book is real too and Henry is surprised that someone actually believes him. August is here to get Emma to believe that the story is true! He needs to find her proof so that she will believe too! He tells Henry he must study the book to come with the next plan.

Back in Fairytale land Prince Charming is still looking for Snow White and finds the Queens soldier running through the woods naked. The man tells the Prince that it was Snow White who did this to him. Charming can’t blieve this, it just can’t be true.

David goes to see Regina to talk about Mary Margaret not killing Kathryn. He doesn’t believe that Mary Margaret did this. She is not evil. Regina attempts to convince David that you never know what people could do. David thinks he can help Mary Margaret and prove she is innocent.

Mary Margaret is still behind bars while Emma tells her about the dagger she found in the heating vent and Emma tells her she should hire a lawyer. Mr. Gold comes in just at the moment to offer his attorney services. Emma tries to get rid of him but Mary Margaret wants her to prove her innocence but she needs Mr. Gold’s help! She tells him that she can’t pay him and he tells her he didn’t ask for money, he just wants to be invested in her future.

In Fairytale land Grumpy brings Snow White back to  Rumplestiltskin and he tells them that he can’t bring her back. Snow White wants to kill the queen so she asks for his help. Of course he is going to be helpful. He gives her the idea to kill her with this arrow and it will kill her! It always finds it’s target. Grumpy is upset and tells Snow she will have to do this alone. She tells him that was always the plan anyway. In return what is her price? He isinvested in her future of course!

David goes to see Archie Hopper at his office and tells Archie about his blackouts and he thinks it could help Mary Margaret.

Meanwhile Prince Charming finds Snow White and he kisses her to help her remember. She clocks him and knocks him out!

In Storybrooke Henry shows Emma a huge set of keys from Regina’s office and he thinks it will fit in the apartment. Henry thinks that is how Regina got in to take the box and the dagger. Emma doesn’t think they will work, but when she picks one and opens her door, she is absolutely shocked!

Snow White has Prince Charming tied to a tree. She knows who he is now and he tries to plead that true loves kiss should have broken the spell. But she is not in love with the Queen. She leaves him there to go kill the Evil Queen!

Back at Archie’s office he is hypnotising David so he can remember his blackouts and what happened. He tells Archie that he talked to Kathryn and she told him that she was moving on without him and that he should be with Mary Margaret and he should be happy. He remembers Snow White not Mary and remember her wanting to kill someone.

Meanwhile Snow White is stalking the Queen on her journey from the castle and she is ready to kill her and she holds up the bow and arrow. She aims and shoots and Prince Charming jumps in front of it! She is ticked about him taking the arrow in the shoulder. He is trying to convince her as to who she is so she doesn’t fill her heart with darkness. She can’t understand why he would die for her. She starts to wonder and she kisses him! The spell is broken!! She remembers finally! He saved her. King George’s army comes to take Prince Charming and they knock Snow White out and they take Prince Charming to the king. She tells him she will always find him.

David comes to visit Mary Margaret to tell her about his visit with Archie. He tells her about he kept saying to her not to kill Kathryn. He wants her to tell him why he would remember that. He believes that she did it. She is soooo upset. She never doubted him when they thought it was him that killed Kathryn. She asks him if he really believe she could do that? He doesn’t answer. She tells him to get out!

Snow White goes back to the dwarves and she brings a mug back to happy and apologize. It’s the only thing she can replace. She is soo sorry for how she acted. They realize that she is back! They all hug her. She tells them about Prince Charming and she must go and get him. She loves him. They are going to help her cause she can’t do it alone. They are on her side.

Emma comes to see Mr. Gold and tells him that Regina set Mary Margaret up. She tells him that she knows it was her and she needs help from him. She thinks he can help her because she can needs to save her friend and she is willing to do whatever needs to be done. Mr. Gold tells Emma she is more powerful then she knows.

Rumple takes a hair off of the cloak he took from Prince Charming and puts it in with Snow White’s hair.

Mary Margaret escapes! Hod did you like tonight’s episode, didn’t you find it exciting?