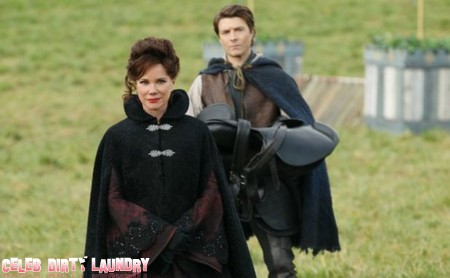 Tonight is a whole new episode of ABC’s hit series Once Upon A Time called ‘The Stable Boy.’  On last week’s show called ‘Hat Trick’ it was all about the Mad Hatter.  Now having the Alice In Wonderland and Mad Hatter story in Henry’s storybook seemed to confuse him and makes me think that perhaps August who was messing around with Henry’s storybook a couple of episodes ago made some additions to the book.  Alice in Wonderland is not a fairy tale it was written by Lewis Carroll long after the fairytales were written.  What do you think?  Curiouser and curiouser!

Through the whole episode we never got to see the Queen of Heart’s face or hear her voice – so I wonder if she is eventually going to be someone important to the show.  Another odd thing she referred to the Evil Queen as her Storybrooke name, Regina.  If you missed the episode you can read our full recap HERE!

On tonight’s show Emma continues her exhaustive search for evidence that will prove Mary Margaret’s innocence in the murder of David’s wife, Kathryn. Meanwhile, in the fairytale land that was and before evil blackened her soul, Regina must choose between betraying her mother, Cora (Barbara Hershey), and marrying for true love, or betrothing royalty and living a regal – but loveless – life; and the event that caused the Evil Queen to loathe Snow White is revealed

Tonight’s Recap: Tonight’s show opens up with Regina looking at a ring. Mr.Gold comes in and tells Regina that he needs a favor. There are charges of assault with bodily harm lined up against him and he does not want to go to jail and tells Regina her influence can make it go away. He wants no more time in a cage! Mr. Gold calls Regina her majesty.

Regina asks what she gets in return? Mr. Gold offers to help her with her Mary Margaret problem. Regina asks one good reason why she should trust him and Mr. Gold tells her he always honors his agreements. True enough!

In the Storybook we see Regina as a young girl jumping her horse and her father watching her. Her father tells her it was beautiful and her mother comes over and says it is hardly beautiful as she rides like a man. Who is going to want to marry her if she behaves like that. Her mother tells her father to stop coddling her she will be an old maid. A Stable boy comes over to get the horse and Regina tells him she is done riding and he should not interrupt her mother and her again. Regina asks her mother why she insults her and Regina walks away and her mother uses magic to make her levitate. Her mother tells Regina that if she let her help her she could make Regina so much more. Regina tells her mom she does not care about status and her mother lifts her higher. Regina agrees to cooperate and her mother lets her down.

Regina goes to the stable boy Daniel and apologizes for being mean to him and he tells her she will have to make it up to him and kisses him.

David comes to Emma and asks how Mary Margaret is – he wants to tell Mary Margaret he does not think she is guilty and Emma tells him the last thing she needs is him.

Regina goes to visit Mary Margaret she has stopped by to offer her a chance. A chance to spare her and the town the drama-Regina wants her to confess and make it easier on everyone. Regina tells her to make a confession or not she is leaving Storybrooke. Mary Margaret asks what she did to make her hate her so much.

They hear someone screaming for help and Regina hops on her horse to save a young child on a runaway horse. Regina saved her life – she tells Regina she will never ride again. Regina tells her the only way to face her fear is to get back on that horse and face it. The little girl introduces herself – it is Snow.

In the Fairytale Regina walks in her riding costume and her mother says that will not do and changes her into a beautiful dress. Her mother tells her she finally did something right the girls she saved was the King’s daughter and he is coming to see Regina. The King thanks Regina and tells her he has been scouring the land to find a women who was interested in his daughter and he has finally found her. He asks her to marry him and her mother answer yes.

Regina runs to the stables and finds Daniel and asks him to marry her. Daniel asks if she told her mother and she says not yet and tells him the girl she saved was the Kings daughter and he asked her to marry him and her mother accepted. Regina tells Daniel they must leave now – Daniel tells her that life with a stable boy is much different that the life as a Queen. Regina does not care all she wants is Daniel. Daniel tells her if she is to marry him he must do it properly and takes a ring and puts it on her finger. Regina is crying and they kiss. Snow walks in and Regina asks what she is doing there. Snow says Regina told her to get back on the horse. Snow who has now seen Regina and Daniel in an inappropriate situation asks what they were doing…

Regina asks if she knows what a secret is and if she does she must keep what she saw and what Regina told her secret. She tells Snow she must never speak of it and never tell her mother. Snow promises.

Emma is looking in the storybook and August walks up to her. August asks her if she still trying to prove her friend was framed. Emma tells him she usually has great instinct – August tells her to start looking at everything all over and maybe her perspective would change.

He asks her what she thought when she started – she says a missing person and he tells her if she approached it from that maybe she would look at it different. She is going back to the scene of the crime and August is taking her. August tells Emma he does not know her that well but it seems beside Henry, Mary Margaret is the closest thing to a family she has. Emma finds a shard in the sand and realizes it is from a shovel and she says it she can prove Mary Margaret is innocent. August says by the way she said it he thinks Emma thinks she knows who has the shovel.

Mary Margaret and August are outside Regina’s place talking to Henry on a walkie talkie they are checking if the coast is clear so they can search her garage… and they find the shovel where the missing shard fits. Emma says ‘we got her.’

Emma walks up to Regina’s house and tells her she has a warrant to search her garage. She tells Regina she got an anonymous tip that Regina was digging near the bridge where the heart was found. She tells Regina to open the garage or she will find a way to get in. Regina lets her in the garage and the shovel is gone (!!) and Emma asks where it is. Regina tells Emma that Mary Margaret is a murderer and she has destroyed the last life she ever will.

Emma shows up at August’s house and asks how he could betray her and Mary Margaret. He denies doing it and tells her he is not a liar. She tells him that is exactly what a liar would say.

Daniel and Regina are running out of the stable and her mother appears there and she says ‘you could have at least left a note.’ She uses magic to put them back in the stable and slams the door – she tells Regina she did not do all she did to be the mother of a stable boy’s wife. She will not let her toss it all away. Regina tells her magic will not stop them. Regina tells her she is going and her mother tells her she is not. Regina’s mother asks if that is her decision and that will make her happy. She says ‘who am I to stop you.’

Regina embraces her mother and thanks her. She walks up to Daniel and takes him aside – she tells him if they want to have a life together and a family there is something she needs to teach him – you always have to do what is best for your family. She put her hand in his chest and pulls out his heart and crushes it and kills him. Regina breaks down and asks why she has done it and her mother tells her ‘because this is her happy ending.’ Her mother tells Regina she knows best, love is an illusion and when it fades you have true power and power endures. Regina tells her mother she ruined everything, she loved Daniel.

Her mother tells her to clean herself up, wipe away her tears because now she is going to be Queen.

Regina asks Snow if she told her mother about her and Daniel and Snow admits she did it because she did not want Regina to lose her mother like she did. She asks Regina if she is mad… MAD – how about insanely mad!!

Regina’s mother comes in and asks Snow to pack they are going to her castle. Snow tells them they are going to be happy at her castle. Regina’s mother heard Regina speaking to Snow and tells her well played. Regina asks her mother if she knew the King was travelling through the country and did she set the whole thing with the horse up? Of course she did – and Regina knows it! I wouldn’t want to be Regina’s mom now…

In Storybrooke we see Regina holding the ring Daniel gave her and saying ‘We got her Daniel!’ But we all know that revenge is a double-edged sword.

Emma goes to speak to Mr. Gold and says to him ‘you told me you could help her.’ Mr. Gold tells Emma it is not over yet and there is still time – and Emma asks him time for what. He say ‘to work a little magic.’ He leaves and Emma throws the plant and vase Sydney brought into the wall – it shatters and Emma finds a bug – a listening device – in it.

Emma goes to see August and apologizes to him – and tells him she should have listened to him. She realizes the people she trusted were the wrong ones. She realizes Sydney betrayed her. It’s about time too!

They hear a scream and Ruby is there – she says’ she is in the alley’ both Emma and August run and there is a body on the ground. Emma turns the body over and it is Kathryn and she is alive and looking confused. OMG!!! You old trickster, Mr. Gold!