BY Robyn Good on March 25, 2012 | Comments: 4 comments
Related : Ginnifer Goodwin, Once Upon A Time, Recap, Television 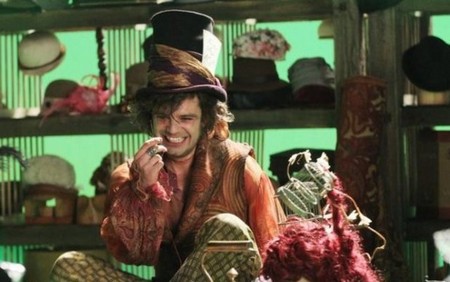 Tonight is a whole new episode of ABC’s hit series Once Upon A Time called ‘Hat Trick.’  On last week’s show called ‘Heart Of Darkness’ Mary Margaret hired Mr. Gold to defend her because she was charged with the murder of David’s wife Kathryn.  Meanwhile in the fairytale  Prince Charming tried to get Snow White’s memory which was still clouded from Rumpelstiltskin’s potion.  If you missed the episode you can read our full recap here!

On tonight’s show which looks like it will be very interesting, we learn the Mad Hatter’s back-story. While searching for a missing Mary Margaret, Emma is kidnapped by a man whose affinity for hats has him teetering on the edge of madness. Meanwhile, viewers will be transported outside of the fairytale land that was for the first time when the Evil Queen persuades a skillful man of magic to come work for her one last time and travel to Wonderland in order to help steal “prized artefact”  from the Queen of Hearts.

Coming to Once Upon tonight will be Roger Daltrey who guest stars as a talking caterpillar, in a tale adapted from Alice in Wonderland.  With only a few more episodes left in the season, their is talk of a second season. ABC looks to be ready to renew the series, but nothing definite has been announced yet.

We will be live blogging the show with all the up-to-the-minute details at 8PM EST so make sure to come back to this spot and watch the show with us. While you wait for the recap you can watch a sneak peek video of tonight’s episode here!  Make sure to refresh often to get the most up-to-date updates!!

TONIGHT’S RECAP: Tonight’s show opens in the jail showing us an open cell and then Mary Margaret running in the woods – she has escaped.  We flash over to Henry reading a storybook.  Emma wants to know what Henry is doing there he has to come to congratulate her on her genius plan.  He tells Emma the escape plan – Emma does not know about it.  Henry tells Emma, Mary Margaret was gone when he got there.  Mr. Gold tells Emma Mary Margaret’s arraignment is tomorrow at 8AM and if she does not show up her future is in jeopardy and so is Emma’s.  Emma lets Mr. Gold know she would rather lose her job than her friend.

Emma heads off after Mary Margaret and it is foggy and she knocks a man off the road.  She goes to look but the man is okay and she apologizes – she tells the man she is looking for a lost dog.  Emma insists on driving the man who introduces himself as Jefferson because his leg is hurt.

In the fairytale Jefferson is running and a little girl Grace finds Jefferson who is her father.  Jefferson comes with his daughter Grace to his house and the Queens carriage is there.  Jefferson asks Grace to hide in the woods until he finds out what the Queen wants.  The Queen tells Jefferson poverty does not suit him – she has a job for him.  He tells her he does not do that anymore – The Queen asks him to do one last favor for her and Jefferson will be able to give Grace the future she deserves.  The Queen tells him she just needs his special skills to get her something.  He gives Jefferson a note and tells him something of hers was taken and is there.  He refuses and the Queen tells him she understands there is nothing more important than family.

Back in Storybrooke – Emma drops Jefferson off at his house and he has a huge one.  She gets out to help him out of the car and up the stairs.  He makes her some coffee so he can warm her up for her search.  He gives her a map that may help her track down her dog.  She looks at the map and starts to drink the coffee and starts to pass out – it looks like Jefferson has drugged her.  He helps her to the couch, she drops the cup and passes out.  Yikes!

Jefferson goes in a wood crate and takes out a hat box.

Emma comes out of the room slowly and creeps into another room where she sees Mary Margaret tied up and gagged.

Mary Margaret was in the woods trying to get away when Jefferson grabbed her. She tells Emma that someone put a key under her pillow in the jail and that is how she got out. They creep out of the room and Jefferson is there – he realizes no one knows they are there because Emma was trying to keep Mary Margaret’s escape quiet.

He tells her to tie Mary Margaret back up and then he grabs her and tells her he needs Emma to do something for her.
In the Fairy-tale Jefferson goes to the Evil Witch and she is glad he has reconsidered. He asks the Queen to promise that if he does what she wants his daughter will want for nothing – forever.

The Queen asks what he has in the box and he takes out a hat and he tells her to step back. The hat spins and a hole opens and he tells her he will jump after her. She says together and tells the Queen to hold on.

Jefferson tells Emma that he is trying to save Mary Margaret. Jefferson tells him he knows she knows about the curse that keeps everyone stuck in Storybrooke town except Emma. He tells Emma if she listened to Henry maybe she would learn something. Emma asks Jefferson why he captured her – he tells her he knows what she refuses to acknowledge – she is special and she brought something special to Storybrooke… magic. She tells Jefferson he is mad and Jefferson tells her maybe she is mad and she should open her eyes and wake up, isn’t it about time. She asks him what he wants – he wants her to get it to work. She asks WHAT he wants her to get to work. He tells her she is the only one who can do it.

In the Fairy-tale the Queen and Jefferson are at special doors and Jefferson tells the Queen they have to go together and stick together. Jefferson goes through a door and the Queen follows him. They are in a land with huge mushroom. Sitting on one of the mushrooms is a caterpillar who asks them who they are. Jefferson says he hates wonderland.

Emma is with Jefferson and he asks her to make a hat and get it to work. He tells her she has magic and she can do it. Emma figures it out… the hat, the tea and the psychotic behavior – she realizes he thinks he is the Mad Hatter. She tells him it is just a story – that he is buying into Henry’s fantasy. Jefferson says the problem is that while everyone wants a magical solution for their problem, they still refuse to believe in magic.

He tells Emma that she has to open up her mind. Jefferson lets Emma know she is not leaving and neither is Mary Margaret until she makes his hat and makes it work. When it works he is going home.

In the Fairy-tale Jefferson asks The Evil Queen where she wants to go in the maze – they are at the Queen of Hearts place and Jefferson does not want to go – The Queen tells him he cannot leave without her and she knows he wants to get back to his daughter. Jefferson throws something into the walls and the walls eat it. The Queen shoots a bolt of fire and tells the walls to stay away from her.

Jefferson and the Queen go up to the door – The Queen gets the door open and takes a small chest. The guards see them and scream trespasser and run after them. The Queen and Jefferson fight them off and run as the guards chase them.
Jefferson sees the looking glass but the Evil Queen picks up a little snack he asks her if she is mad – does she know what the food her does. She opens the small chest and puts the food in and smoke comes out and the smoke turns into her father. The Queen of Hearts took her father as leverage. Jefferson realizes the Queen knew only two could go back and that is why she never told him that her father was there. Jefferson tells the Queen he promised his daughter he would be back for tea. The Queen tells him he won’t be and he was right, you should never abandon family. The Queen of Hearts guards catch Jefferson and are taking him to the Queen… looks bad for old Jefferson.

Jefferson is brought in front of the Queen of Hearts – she knows that Jefferson was responsible for stealing what belonged to her. The Queen of Hearts wants to know how he got in there – he will only tell if he can go home to his father. They come up and cut off his head – however, he is still alive. Jefferson admits it was his hat that got them there. The Queen tells Jefferson to make another hat and make it work.

In Storybrooke Emma tells Jefferson she cannot make the hat and she does not understand why Jefferson wants to leave the beautiful house. He takes Emma to the telescope and shows her a little girl – the girl’s name is Paige but it is his daughter Grace who has a new family and a new father. Jefferson’s curse is to watch his daughter grow up with someone else.

Emma realizes he wants the hat to work so he can take Grace home to his world. Jefferson agrees that is the one place they can be together and Grace can remember who he is.

Emma tells Henry she found Mary Margaret. Paige/Grace comes up to Henry and says hello and Emma asks to see Henry’s storybook because she is curious about something. She opens the book and Jefferson is there.

In the fairy-tale Jefferson is desperately trying to make an effective magical hat but the room is filled with hats. Jefferson is beyond distraught – he is truly now the MAD HATTER.

Henry tells Emma he has to go and she asks to keep his book for a while and he agrees. Emma is upset that she recognizes Jefferson. Is Emma FINALLY starting to believe…