BY Annemarie LeBlanc on May 6, 2012 | Comments: 4 comments
Related : Ginnifer Goodwin, Once Upon A Time, Recap, Television 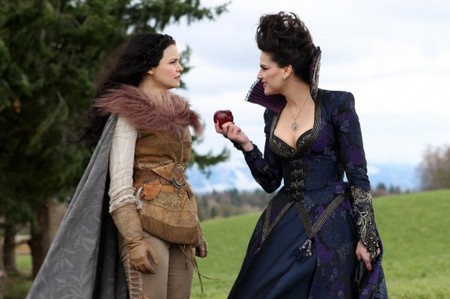 ABC’s # 1 Drama – Once Upon A Time returns tonight with a new episode.  This is the last episode before the finale next week and it is called “An Apple Red as Blood” and we will be live blogging it with all the up-to-the-minute details.  On last week’s episode we found out who August was and how he was important to Emma.

August promised to enlighten Emma on who he was and take her on a journey that would show her how she could beat Regina, and possibly take custody of Henry.  Although Emma did not buy that August was Pinocchio.   Mary Margaret returned to work, and Regina put her plan in motion to seduce David.

Meanwhile, in the fairytale, with the Evil Queen’s curse about to strike, Geppetto agrees to a plan that will save Snow White and Prince Charming’s daughter, but with a proviso that could also save his own son.  If you missed the episode you can read our full and detailed recap here.

On tonight’s episode Henry pleads with Emma to stay in Storybrooke and continue her quest as the savior of the fairytale dwellers, and Regina concocts a plan that could rid her of Emma forever. Meanwhile, back in the fairytale land that was, Snow White enlists the aid of her fellow fairytale cohorts to attack the Evil Queen and save Prince Charming’s life.

Tonight’s Episode: Tonight’s episode opens with Regina and Henry sitting at the table eating. The doorbell rings-is Emma, Regina asks what she is doing their? She tells Regina Henry invited her.  Regina tells her she’s not welcome at her dinner table. Emma tells her that she came for her they all did. They take her and they tie Regina to the tree, Emma tells her she took away their happiness now with their time to take away hers. Emma says to Regina, “You are rotten to the core.”  Emma gets a sword from David and Regina begs Henry to help her and not let them hurt her. Emma goes at Regina with the sword and Regina wakes up from her dream.

Regina goes to look in Henry’s bedroom and he is Gone. Meanwhile, Henry is driving the car with Emma and Emma tells him they are leaving town now. Henry tells Emma they cannot leave, Emma is the only chance to break the curse. Just as they get to the border of Storybrooke Henry pulled the car wheel and they go into the ditch. He begs her not to leave, the town needs her.

In the fairytale, the King is mad at Prince Charming because all he had to do was marry King Midas’ daughter and instead he decided to follow his heart.

They put Prince charming in the guillotine and the King orders that his head be chopped off. As the blade comes down, the blade turns it to water. The Evil Queen walks in and the King asks her why she stopped the beheading. Regina tells the King she wants Prince Charming and she’s willing to pay far more than King Midas will. She promises the king that she will make him suffer more than a beheading she will make him lose his one true love, Snow White.

Back in Storybrooke Regina goes to visit Mr. Gold and she brings him an apple from her tree and she tells him that her tree is dying and she wants to know why. Regina thinks that it is Emma’s fault that the tree is dying.  Mr. Gold tells Regina that Emma wants Henry. Regina says over her dead body.  Regina says she just wants Emma gone and dead. Mr. Gold tells her if something happens, the curse will be broken. Regina asks Mr. Gold to change the curse, since he was the one who casted. Regina wants to change the terms of the curse.

Mr. Gold suggests that Regina go on a trip because once people wake up and realize who she is they will be out for blood.

In the fairytale Snow White and the dwarfs are trying to rescue Prince charming. Little red riding hood comes and tells them that the evil Queen is there at the Castle too.  The dwarfs think it is a trap.

Jefferson comes to see Regina, Regina wants his help. Regina tells Jefferson if you kill certain you’ll never see his daughter again. Regina has a way for them both to get what they want. Regina gives Jefferson a hatbox should, Regina wants to use it again. Jefferson tells her he cannot use it here he needs magic. Regina tells him that she has a little magic and she wants to use it one last time. She wants Jefferson go back into the fairytale and help her find a solution on how to get rid of Emma.

She tells Jefferson they can both get what they want if they work together. Regina promises to wake up his daughter Grace if he does what she wants. He tells her he doesn’t want her to wake up, he wants her to write a new story for him.

In the fairytale the dwarfs, the fairies, the fairy tale characters and Snow White are outside the Kings castle where they are holding Prince Charming.   Snow White gets in the Castle had the soldiers tried to attack her.  They beat the soldiers then they get into the inner Castle, where a fight ensues.

Just when they think they are successful, guards around them. But the fairies are coming and they drop fairy dust that knocks the soldiers out.

Henry goes to visit August, he tells them he needs his help because Emma wants to leave. Henry wants on August’s help. August tells him he failed, he showed Emma his leg.  He shows Henry his arm and that is turned to wood to.  He’s turning back to wood because he hasn’t been a good boy.

August tells Henry with the time he has left he wants to spend it with his father Marco. Bob tells Henry he’s out of operation cobra now it’s up to Henry.

Dr. Hopper tells Emma she has no case for custody and asked, who will be heard in the end, Henry. Emma asks if Dr. Hopper thinks Regina would ever hurt Henry. He tells her NO!

Dr. Hopper tells them about the war has to and with Regina if they both are going to be in Henry’s life.

Mary Margaret comes in to jail and fines Prince charming in a cell.  She runs in and she sees a mirror with Prince charming and that any tells Snow White that the Evil Queen took him to her castle.  She tells him she is going to rescue him.

Prince charming disappears and the Evil Queen is there in the mirror.  The Evil Queen asks snow white to come and talk just her and SnowWhite. She wants to meet where it all began.

The dwarfs, red riding hood and Snow White’s friends beg her not to go see The Evil Queen alone. Snow White tells you something she has to do, and she thanks them for their love and support.

Regina tells Jefferson to watch is that she’s bringing down somewhere where she the last of her magic.  Jefferson puts his hat on the floor, he tells Regina that this had is not fitting it is not working. Regina says she has something left a few trinkets she dumps them in the hat.  the hat doesn’t move, Jefferson tells her she needs something with magic. Regina takes a rating out of her pocket and he clearly has magic, Jefferson tells of the put of the hat if she wants to have her son back. She puts the ring and hat starts to spin, but a portal does not open. Regina feels they have failed.  Jefferson tells her perhaps he can put his hand in and take something that might help her with her quest. He asked her if there is something small enough that she can do that with Regina tells me yes. He tells Regina to think about it and put her hand in the hat. The hat starts to spin and the portal open. Jefferson asked what they are after and Regina tells him an Apple.

Jefferson has his hand out of the Apple falls into it.  Regina takes the Apple. Jefferson tells her now he gets what he wants. Regina tells him no the next problem is how to get Emma to eat her for forbidden fruit.

We see Regina in the kitchen baking an apple turnovers. Emma comes the door and tells Regina they need to talk and Regina agrees.  , tells Regina she thinks that whatever is between them has to end. Emma wants to make a deal with Regina about Henry.  Emma is going to leave town but she wants Regina to agree to let her see Henry when she wants to.

Regina is, to follow her into the kitchen – Regina takes couple turnovers from the oven. Regina offers Emma something for the road, and takes an apple turnover and puts it in a plastic container. She tells Regina it is her famous recipe and is delicious.

Emma thanks for and Regina tells her,” I do hope you like apples!”

In the fairytale red riding Hood and mother Huppert are in the stable looking for snow white. The doors call and they have found no weight on the ground. They think she’s just sleeping, but red riding Hood tells them she’s gone and she sacrificed herself for true love.

Regina comes to see Mr. Gold and tells them she hopes the spot travel insurance. She tells him she found a solution to her problem. Mr. Gold tells her she use magic to do magic and all magic comes with curse. Regina tells him that he can pay it Regina tells that she one, and whatever plan he had or whatever reason he wanted the curse broken, too bad, because it is never going to happen.

She stomps out of his shop.

Emma tells Henry she made a deal.  Henry tells Emma that Regina wants her dead. Henry looks at the table and sees the apple turnover.  Henry tells Emma not to eat the apple turnover, it will kill her. Henry takes the turnover and puts it in his mouth and starts eating it. He tells Henry she may not believe in the curse and she may not believe in him but he believes in her.

Henry falls to the floor and Emma yells!