BY Kinsley Goldman on January 9, 2012 | Comments: Leave Comments
Related : Once Upon A Time, Television, Wrap-Up 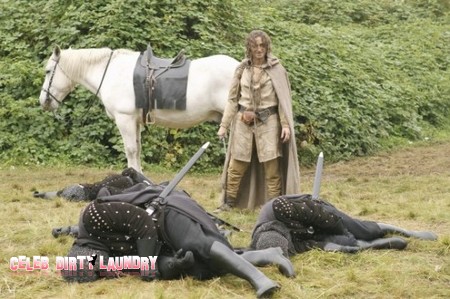 Last night was the mid-season premiere of One Upon A Time  and we recapped it.  Last night’s show was all about Rumpelstiltskin and that always means a great show. In our wrap-up we have some observations of last night’s show and some questions.

The first question on my mind is why did Mr. Gold help Emma win the election for Sheriff?  At the end of the show Mr. Gold explained ‘because they made a deal a while ago and she owed him a favor.  Now that she is sheriff he is sure she can find a way to repay him.’    Why do I think the favor will have something to do with Regina and will NOT be something Regina likes?  What do you think?

It was interesting find out how Rumpelstiltskin went from a mild mannered, coward who deserted in the Ogre War to the ‘Fearless Evil Dark One?’  What did you think of it?

We saw more of the deep animosity between Regina and Mr. Gold.  It is clear Mr. Gold knows he is Rumpelstiltskin and that Regina knows this and that he knows that she know that he knows.

Regina was even fooled by the fire and thought when Emma gave Mr. Gold up at the debate that she had made an enemy of Mr. Gold.  She tells Emma, ‘Mr. Gold makes a good friend but a superlative enemy.  Enjoy it!’  Do you think Mr. Gold is more clever than Regina?

In a nice moment Mary Margaret (Snow White) met up with David (Prince Charming) again for a brief time.  Mary Margaret was posting campaign posters of Emma and David for Sydney who his wife Katherine supports.

It is not that the story progressed in terms of plot hugely tonight but getting to see long scenes with Rumpelstiltskin (Robert Carlyle) who is the best actor on the show was a real pleasure.  His acting is on a the highest level.  He would be a credit to any TV or film production and you cannot say that about all the cast.

What did you think of tonight’s show?  Any observations we missed?  Sound out in the comments below and let us know your thoughts?

Make sure to come back next Sunday when we will be cover episode 9 called ‘True North.’ In the episode we will see Emma trying to find the birth father of two children to keep them from meeting the same fate she had as a child.  In the fairy tale world, the Evil Queen uses Hansel and Gretel steal an artifact for her from a rival.