One Direction’s Harry Styles Comes Out Against Cougars 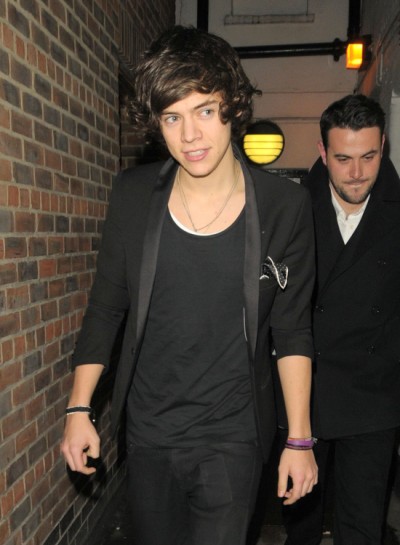 One Direction’s Harry Styles has been thought to seek out the experienced attention of the older ladies but he’s finally coming out saying he’s not sure where that whole cougar-loving rumor came from.

HollywoodLife.com reports that Harry told Teen Vogue that unlike fellow teen heartthrob, Justin Bieber, he prefers girlfriends of the younger variety. “I don’t know where the cougar thing came from, to be honest. I don’t know why people got that impression.”

Harry also puts the stop on the notion that he was hooking up with Inbetweeners beauty, 22-year-old, Emily Atack. “I don’t know where anyone got the idea that she’s my girlfriend. We’ve only met a couple of times — we’re friends. I didn’t even kiss her! I’m single. Happily single.”

Yes, we did hear that courtesy of his mother’s damage controlling interview. Harry is very single and very ready to mingle. The UK Mirror asked Harry’s band mate, Louis Tomlinson, which One Direction singer scored the most chicks on tour and he replied, “Do I even need to say who? I think it would be completely and utterly unfair to single out girls in that way, or put it like that. But … if you were to put it like that, I think it would possibly be … Harry. Do we keep a tally? No, we do not! That’s hideous.”

That’s not hideous! You’re rock stars! It would be hideous if you didn’t score with each and every groupie that crossed your path because you’re HUGE and YOUNG, and, judging by your music and histories of ‘N Sync, New Kids on the Block, and the Jonas Brothers, those chactacteristics don’t last forever. Take advantage boys!