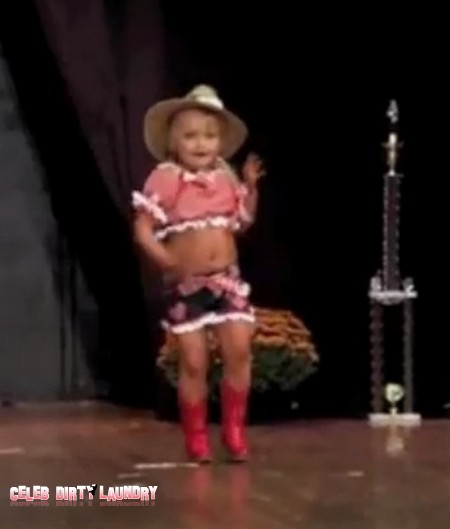 Toddlers & Tiaras has always been controversial but the video below is one of the most disturbing episodes of the show I have ever seen.  Coupon Queen June Holler and her six-year-old daughter Alana Holler from McIntyre, Georgia dished on how far mothers will go to make their little princess stand out and June thinks it is okay.    Before Alana goes into a competition she is sucking down ‘go-go juice’ which according to her mother June makes her hyper.  When Alana talks on the video after drinking the concoction her words are slurred and she behaves as if she is drunk or dugged.

The National Enquirer has more: “We had tried Pixie Stix… We went through fifteen bags at one pageant, and it just don’t do anything for her,”’ June said.  With the sugared taste treat failing to boost the six year old’s energy levels, stage mum  June last resort was to whip up her own liquid concoction.  “A lot of pageant moms and people know what the “special juice” is – everybody has their different concoctions, “special juice” is to help her energize her.  “A lot of moms say, ‘Oh, well you’re doping up your child’, well hey, no I’m not. I’m not hurting her,” she claimed.  “She just drinks it for pageants, to give her that extra “oomph”. So, whatever works for your child, use it.”

Imagine a 6-year-old girl – who has probably just only recently learned the alphabet -strutting about in a revealing top and mini-skirt like a stripper or even a prostitute.  Well that is what you’ll see at the end of the video – Alana acting sexually active and mature.  This would be horrible enough if it wasn’t happening under their parents encouragement and prompting!  These children need to be removed from their parents clutches and then their parents must be criminally prosecuted.  Pedophilia is illegal and abhorrent – the parents here are both encouraging pedophilia and grooming their little kids to be its victims.

What do you think?  Sound out in the  comments below and let know!