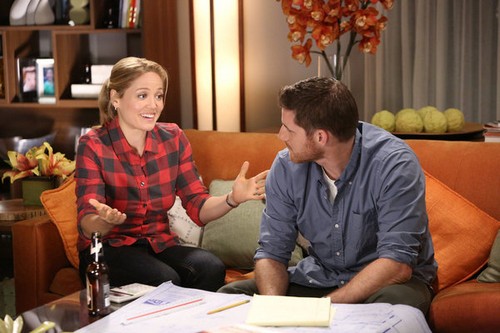 NBC’s popular show PARENTHOOD returns tonight with a whole new episode. Tonight’s eighth episode of the 4th season is called “You Can’t Always Get What You Want.” On tonight’s show Julia struggles with her recent career decision while Joel contemplates his future. Meanwhile, Sarah is forced to make a difficult choice affecting her personal and professional life. If you missed the last episode you can read our full and detailed recap here!

On tonight’s show Julia (Erika Christensen) adjusts to her new role as a stay at home mom while supporting Joel’s (Sam Jaeger) ambitions. Crosby (Dax Shepard) encounters a disruptive neighbor that may threaten the future of the Luncheonette. Sarah (Lauren Graham) and Mark (Jason Ritter) disagree about parenting and relationship issues. Max (Max Burkholder) is forced to make a difficult decision as the new student council President while Kristina (Monica Potter) and Adam (Peter Krause) encourage him to take advantage of new experiences. Amber (Mae Whitman) tries to help Ryan (Matt Lauria) with his career.

Tonight’s show: Joel shares with Julia that he has been offered the position of Foreman and she tells him although that is great, Victor is their priority to which Joel tells her she can now be a stay at home mom.

Sarah gets a phone call from Hank at 1:00am, he is drunk and needs a lift, Mark is shocked that he couldn’t call anyone else.  Sarah picks him up and the reason he is drunk is that his ex-wife is taking his daughter to Minnesota.

Amber and Ryan at the studio and a woman walks in wants to see the owner, she barges into the recording room where Crosby is with a band, her name is Marlese and she is upset about having no parking and the excessive noise and smoking.

The next morning, Hank tells Sarah that he booked a job on the weekend – then he thanks her for picking him up.

At school, Julia is dropping off the kids at school when she bumps into some other women who invite her for the morning gab fest.

Kristina and Adam talk with Max about being class President, he is vetoing a dance that some other kids want to have because he still hasn’t got his vending machine. He gives in and tells his parents that he will go ahead with the dance, but he is not going.

Sarah tells Drew that she and Mark are going to the wedding on the weekend and he is not staying home alone, he is going to his grandparents which doesn’t thrill him in the least.

Joel and Julia are having dinner with the kids, the deal went through – he got the job. Julia shares her day, she made homemade pasta and went to Wednesday Coffee Club with some moms.

At the studio, Marlese barges in again and she has filed a complaint with the city, Crosby is furious.

Drew is angry at Sarah and Mark tells her that if he wants to have sex with his girlfriend, so if they are going to do it they might as well do it at the apartment so they know where he is, Sarah does not agree. Sarah goes on to tell Mark that Hank booked a job for the weekend and she was thinking of going and meeting him at the wedding, but he is not thrilled about and doesn’t want her to go because they booked time off a long time ago to go to the wedding.

Crosby goes to see Julia about what he can legally do about Marlese, she tells him to just be nice, that is the best advice she can give him.

Adam wants to talk to Kristina about the dance, he is not thrilled about forcing him to go and tells her that there will be more dances. Kristina feels that she doesn’t know how much time she has left and doesn’t want to miss out on any milestones.

Julia and Joel are in bed, he just got off the phone and more good news about his new job. Julia is upset, she tells Joel that she feels he is bailing on the family. Joel is upset, he has never but into Julia’s job and wishes he got the same courtesy from her.

Crosby goes over to Marsele’s house with a basket of goodies and an apology, but she is not impressed and throws the cd’s over the fence, but keeps the wine.

Sarah arrives at work with Hank and tells him that she can’t go with him this weekend. Sarah tells him the rehearsal dinner is Friday night and she can’t miss it.

Julia apologizes to Joel and tells him that she respects him and doesn’t want him to feel anything other than that. Julia goes on to tell him that she doesn’t think she is cut out for this stay at home mom thing, she doesn’t feel fulfilled.

Adam brings Max a book and approaches him about the dance, he goes on to tell him that his mom really wants him to go and because she is sick we sometimes have to do things that we don’t like. Adam tells him that he needs him to do this, for his mom and that is just the way it is.

Crosby returns to Julia, he is being sued by the angry neighbor lady and could shut him down. Crosby does not want to put this on Adam’s plate but Julia thinks he needs to know about it.

Amber visits Zeek and tells him about she and Ryan, she goes on to thank him for introducing them. Zeek wants to know hot the job interview went, but Amber tells him that the guy asked Ryan rude questions about his past so it didn’t go well. Amber is worried, last weekend they went to a funeral of one of the guys in his unit who committed suicide, it is all pretty scary and hurts her to see Ryan in so much pain. Zeek reassures her that everything will be ok and tells her to give it time.

Sarah is at home, she tells Mark that she is still considering to do the job with Hank because he really needs her there. Mark is confused, they talked about this and they have been planning this for months. Mark is upset, Sarah tells him that she is just trying to help Hank out because he is also having this personal problem. The two get into a fight and she tells him there has been a complication and she is trying to figure out how to do both. Mark is furious, tells her to go be with Hank and walks out.

Max is dressed in his new shirt, he goes downstairs to see Kristina and tells him that he is going to the dance for thirty minutes then Adam is taking him home. Kristina gives Max advice on asking a girl to dance, then she shows him some moves.