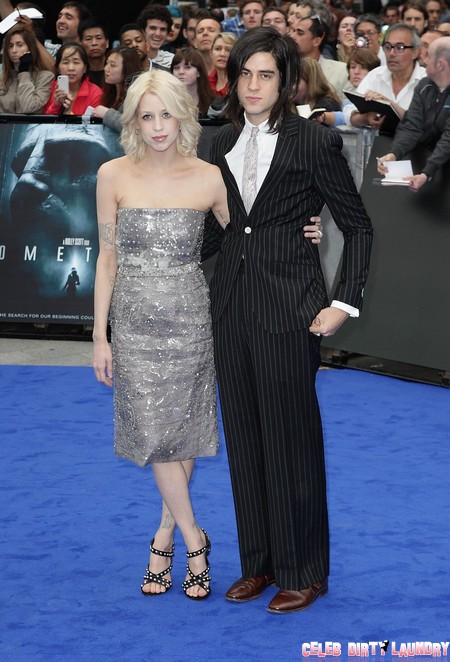 Add Peaches Geldof to the list of stupid celebs that think that we are stupid enough to believe the lies they weave to cover their asses. Girlfriend was walking four month old son, Astala Geldof last week in London when she hit a crack in the pavement and her stroller did the equivalent to a face plant into the sidewalk. Most moms really hang onto their strollers and if you sense a problem, you can feel it and hang on tighter. Not dear Peaches here, who let the stroller go while keeping a firm hold on her cell phone instead!  She tweeted about the incident later saying,

‘Thankfully Astala didn’t fall out as was strapped in and so didnt get hurt at all or cry. But still the London pavements are SO dangerous! ‘If he had fallen out he could have seriously hurt himself! And it’s impossible to see these cracks When pushing a pram. The mayor of London should do something about it it’s ridiculous! Thank god Astala is ok! X.‘

I would totally buy the freaked out mother thing if not for the photos of poor Astala tumbling feet over head to the ground. See for yourself, he was most definitely NOT strapped into anything. If he had been then there’s no way his body would have landed to the side as it did. Any mom who has strapped a baby into anything will confirm this fact.  You also have to be moving pretty darn fast in order to topple a stroller like that. While Peaches passes blame what I see is her hanging onto her most precious cargo, her cell phone, while scrambling to get to somewhere fast. Gotta wonder how much of a cramp little Astala has put in Peaches style. She is known for her ditzy, hard-partying ways, not for her domestic abilities.

Speaking of domesticity, Peaches Geldof married her baby daddy, Thomas Cohen, at St Mary Magdalene At St Lawrence Church in Kent on Saturday. It’s already the second marriage for the 23 year old daughter of Bob Geldof and thankfully little Astala survived his brush with stroller death and was able to attend.

How do you think Peaches is really handling new motherhood?  Will her son make it to his first birthday without being a serious victim of his mom’s stupidity? Tell us your thoughts below!