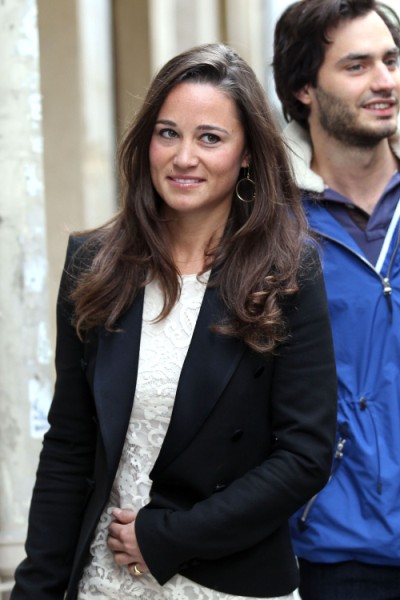 Only in America can Chelsea Handler fight with Pippa Middleton over the same guy. That’s why Pippa’s got to move here! She’s only been in the states a couple days and she’s already causing trouble! Pippa’s on the east coast finalizing deals for the debut of her party planning book, Celebrate: A Year of Festivities for Families and Friends, but naturally all anyone wants to talk about is the total flirt fest she’s having with Chelsea Handler’s on again, off again boyfriend, Andre Balazs.

I heard Balazs is hosting Pippa while she’s in town. The hotelier was seen playing ping pong with Kate Middleton’s little sister and giving her all kinds of attention. Well, we all know Pippa never shies away from that! A source told Page Six it was “flirt central” and, “There was definitely chemistry. Andre was being very charming.”

“Flirt central?” Really, I’d like to know who said that and smack them in the face. What are we 12?

Of course he was charming! He’s in the hospitality business! And what enterprising American wouldn’t want to bag Pippa Middleton? Your niece/nephew would be the next monarch! You’d get to go to royal parties. Poor Princess Pippa. She’s such a piece of meat. She really has to worry about men wanting her for the right reasons. She’s the most elligible bachelorette in the world and it really has nothing to do with her tight ass or party planning abilities. That’s why Alex Loudon is such a solid choice for her. They dated before she was a duchess’ sister. And he doesn’t need her to be successful.

Now, Balazs doesn’t need Pippa’s exposure or her money either. He’s incredibly successful in his own right and has dated Uma Thurman and, oddly enough, Handler. Do you watch Chelsea’s show? God, I hope she brings this up! She has to! It’s too good not to talk about how her maybe boyfriend is flirting with Pippa. But I doubt she’ll bash Balazs. Chelsea can be harsh to women suspected of stepping in on men. Angelina Jolie can attest to that!

I doubt the flirting was anything more than that though. Pippa’s on her best behavior. Trust. If you don’t believe Mrs. Cambridge didn’t sit her sister down and give her a big talk before she left you’re sadly naive and mistaken. Pippa knows the last thing her reputation needs is a booty call rumor in America – with an American who dates comedians no less.

Do you think Chelsea will bash Pippa on her show? Could the royal family ever get behind a Pippa and Andre Balazs union? Do you think Kate put Pippa under strict instructions to behave herself across the pond?