Pippa Middleton Devastated By Cruel Remarks About Her Face 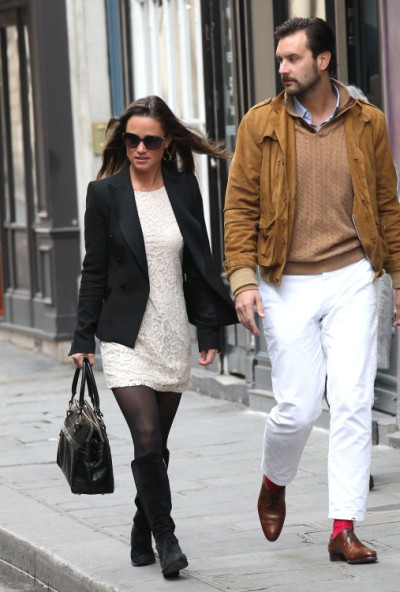 Pippa Middleton has had a rough couple of weeks. While her big sister, Kate Middleton, has been basking in the glow of gold medals and Olympic torches, Pippa got a royal smack down by one of the most famous (and famously crotchity) designers in the world. Princess Pippa is reportedly “devastated” by Karl Lagerfeld’s harsh and unnecessary remarks regarding her face and, despite all her friends’ best efforts, is inconsolable over the very public embarrassment.

According to Female First magazine, a source told Closer magazine: “Pippa’s devastated by Karl’s cruel comments – she’s always been confident about her looks. But she doesn’t want to retaliate and start a war of words. Her friends have tried to make her laugh about it as Karl is hardly a supermodel himself.”

Karl went on record and said, “Kate Middleton has a nice silhouette and she is the right girl for that boy. I like that kind of woman, I like romantic beauties. On the other hand, her sister struggles. I don’t like the sister’s face. She should only show her back.”

If it makes Pippa feel any better, Karl also called Heidi Klum fat! She’s in good company! But I’m sure it doesn’t. But good call on not getting into the war of words. I can’t imagine the royal family would be down for that and I’m not so sure she’d have a chance against Karl. He can cut a b-tch and has too many minions!

Nevertheless, how could any girl not be deflated by those remarks? I know I would be. It’s bad enough he called her ugly but to have to tell the whole world… that’s such a b-tch move. To look on the bright side, Pippa should be stoked a man of that celebrity even knows who she is (despite referring to her as just “sister”). But she has to realize that you get bitten when you play with the big dogs, and deep down, I think Pippa wants to be a player. If she wants to break out from under her sister’s shadow and make something of her party planning career, she has to be ready for these remarks, because her continual rise won’t go smoothly. Look at Kate. Yes, she’s everyone’s favorite princess now but everything she wears and says and does is constantly criticized. Do you have any idea what that must feel like? I don’t but it seems horrible! Pippa can’t just get all the rewards of royal life and connections and not the backlash. I think she already knows this, but at 27, it probably still stings like hell. I bet getting told to walk into a room backwards still stings at 87.

But that’s why I want her to rebound. I want her to sell the hell out of her little book and thumb her noses at the aristocrats and the sycophantic designers who cater to them and move on. She’s supposed to have the thicker skin of the two Middleton girls and that can’t be a coincidence. She’s the one that’s going to need it the most!

Do you think Karl’s comments were out of line or do you think Pippa puts herself out there to be ridiculed and should just get used to it? For gossip’s sake, should Pippa Middleton and Karl Lagerfeld start a feud? Who do you think would win? Karl would be the early favorite but Pippa has Kate who could boycott Karl’s designs. It would be fun to watch!