Pippa Middleton Is Too Jealous Of Kate Middleton 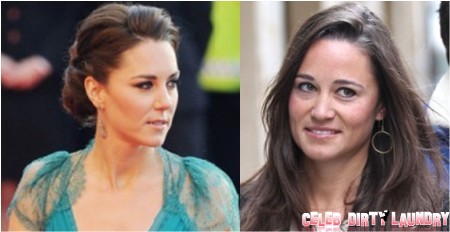 Kate is on my hottie hot hot hottie list for obvious reasons and she is also genuinely nice, people love her, so I can see why Pippa could be a bit jealous.  Pippa loves attention and being single, she doesn’t live under the same strict rules as her sister, so before the Jubilee events Kate instructs her to “behave well.” This seems to be common sense and Pippa doesn’t appear to be dumb, so I can see how that right there would make her upset for her sister to boss her around and tell her to behave a certain way.

Although, in some ways Kate does have a good reason to keep a watchful eye on her sister; Pippa was found recently in a photograph next to a man holding a gun while she was in France. Now, that is certainly not the greatest thing for the Duchess of Cambridge’s sister to be seen with, especially given Kate’s high royal standing. Seems like an obvious attempt to gain attention?

Our source reports, Kate Middleton is in fact now even more worried about her sister, she is afraid of what she might do next.