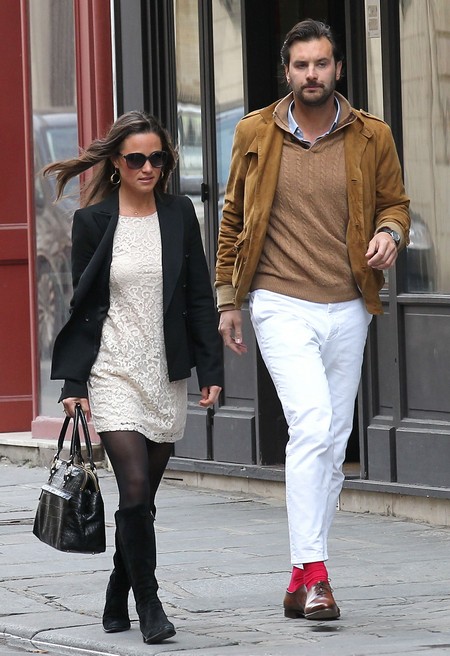 Pippa Middleton is off the reservation and sampling the finest bachelors that Paris has to offer.  As Kate Middleton’s sister, a relatively high standard of behavior is expected of Pippa – and that is why she probably wasn’t at Coachella!   Pippa has been spotted with three of France’s upper echelon bachelor’s and love seems to be in the air for Prince William’s sister-in-law.  Does this mean that things have cooled off for Pippa and George Dominic Percy?

Pippa’s on-again off-again boyfriend, Earl Percy, as George Dominic is titled, accompanied her when she joined Kate and Prince William skiing in the French Alps two weeks ago.  At that time it appeared that Pippa had replaced Alex Loudon with the super-wealthy aristocrat.

This weekend Pippa decided to do an elite tour of Paris’ social life – and it seems that she was the toast of all who saw her there.

On Friday night the younger sister of the Duchess of Cambridge was hand in hand with television producer Antoine de Tavernost as the pair attended a fashionable party.

Antoine, 28, is the son of television mogul Nicolas de Tavernost, who owns French cable channel M6, is director of leading football club Bordeaux – and is one of the richest men in France.

Pippa certainly seemed to be enjoying the attentions of a handsome mystery man at a period costume party held by the fashion label Vicomte Arthur. They caroused into the early hours, finishing at the fashionable nightclub Raspoutine.

The label is named after its owner, her chum Vicomte Arthur de Soultrait. He is a well-connected entrepreneur who is making the ties for the French team at the London Olympics.

He is the brother of Viscount Arthur de Soultrait, 29, who Pippa met the same day.

It was his birthday party she had been at the previous evening with Antoine.

The Pipster is doing Paris in the spring as if she hasn’t a care in the world – and as if she has no attachment to Earl Percy.  Do you think that the palace would frown on Kate’s sister hooking up with a Frenchman?  We do.  No doubt Pippa is expected to settle down with a nice British aristocrat – but does she intend to comply?  At least Kate can breathe a sigh of relief that Pippa didn’t decide to attend Coachella!