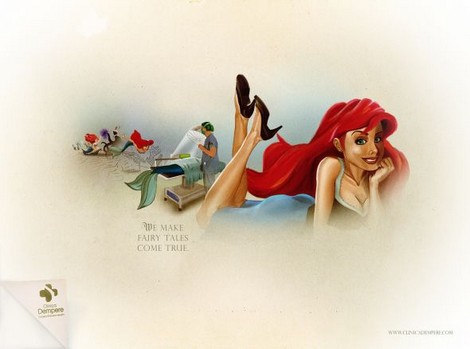 Ariel The Little Mermaid was the go-to Disney princess for an entire generation of kids back in the 90’s. This fictional character received more endorsement deals than the entire Kardashian tribe put together and often times she is referred to as “princess who got it all this morning”. Okay, no, that’s Kelloggs’ All Bran Flakes, isn’t it? Isn’t it?

However, this innocent little singer under the sea has received a make-over from Clinica Dempere – a plastic surgery centre in Venezuela, or Infectionville, however which way you look at it. The ads show Ariel resting her head on her one hand, smiling like a drunken girl after a night of binge drinking. The slogan of the ad reads, “We make fairytales come true!” Uh, didn’t anyone tell you that you’re scarring a fictional princess? Behind Ariel’s resting booty, a part of her tail is seen lying on an operating table, with a surgeon cutting away the excess junk. Oh, did we mention that her tail has been removed also? (How jealous would this have made Darryl Hannah in Splash?) She escapes the evil Ursula in the background, but the poor girl’s fate is left up to a plastic surgeon whose head looks like a dying cupcake.

Another ad shows the witch from Sleeping Beauty worked on by these American Horror Story surgeons.  Her transformed face and figure is presented in colorful fun, reminding us of a crack head after rehab. Almost no fairy tale character is left “untouched” as the ads even include the frog from Princess and the Frog.

Is this a form of vile social commentary? Has society become so obsessed with beauty and beauty products that no area of marketing is left untouched? Yes, we admit, the advertisements are quite catchy and extremely original, but this still does not make up for the fact that our childhood hero is being cut up by bad men wearing green masks. Imagine the poor girls who experience the nostalgia of Ariel on DVD (we experienced it on Beta Max and VHS) and then pop onto the internet to play Dora The Explorer, but are stopped by an advertisement, no, not the free desktop stripper one or the Russian girls waiting for you to call, but the one of the girl they want to be one day, morphed and cut into an entirely different woman.

Keeping up with the Kardashians is bad enough for any little girl who wants to follow in the footsteps of “the woman with the big bum”, but these ads send the message of “it is okay to hate your mermaid tail, because we’ll cut you up quicker than the victims at Jason Voorhees’ house party.” The message is sickening. Why can’t we go back to the golden age of Atari and riding on bicycles and playing with pet rocks?

Now, where did we put that old Monopoly box where the scent of nostalgia is held within the perfectly chaotic bills?

Let us know in the comments below whether you approve or disapprove of these ads.

Just look at the marvels of modern medicine