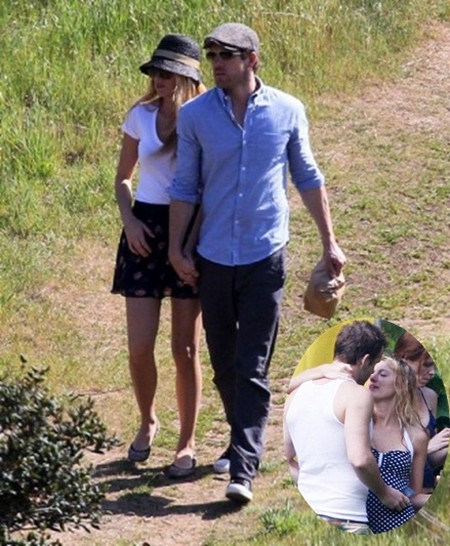 There’s certainly no trouble in paradise with Blake Lively and Ryan Reynolds! Eight months into their relationship, the pair seems to be going strong… very strong. The famous couple have both had their share of Hollywood romances, Blake having recently been linked to Leonardo Dicaprio, while Ryan was recently divorced from Scarlet Johansson. This fledging romance however, seems to be working out just fine.

The duo were spotted on July 4th celebrating Independence Day with Blake’s whole family in New York – and the pictures to prove it are sooo cute!  The PDA between Ryan and Blake is enough to want to make you melt, not to mention the interaction the couple has with Blake’s young nieces and nephews.

Blake, 24, and Ryan, 35, were seen with their arms wrapped around each other with Blake looking adorable in a blue and white polk-a-dot bikini and Ryan going from khakis and tank, to shirtless and swim trunks – the best way I like him. While they shared many smooches, this is one couple looking happy in love.

Even cuter was Ryan taking pictures of her family on his iPhone – this guy is clearly smitten!  And who wouldn’t be?  Blake is gorgeous, charming, and very down to earth.  She’s admitted that she often styles herself and does her own hair and makeup for events, only further cementing the fact that this is not one crazy diva.  And Ryan, well aside from being a hottie Canadian, he has always been known as charming and charismatic as well.

So are there wedding bells in the near future?  Whoa – slow down folks, they’re baby-steppin’ this one.  For now, let’s let them enjoy splashing around in there swimmers!