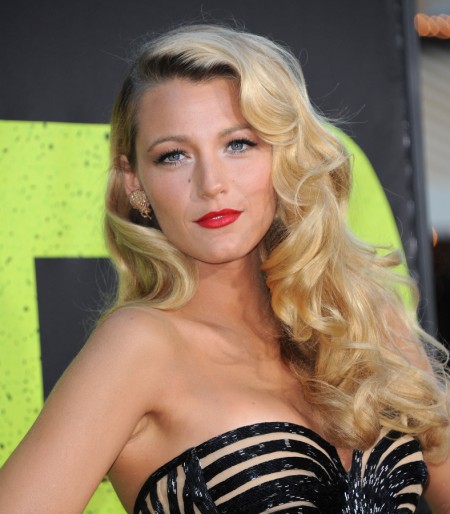 Blake Lively shut it down last night at the premier for her new Oliver Stone movie, Savages.

The 24-year-old Gossip Girl star rocked a Zuhair Murad gown that left nothing to the imagination. Blake has prided herself on the fact that she doesn’t use a stylist so if she came up with this ensemble for herself then she is my new hero. She’s also my hero because she tied Ryan Reynolds and Leonardo DiCaprio around her little finger all in the course of one year.

If Blake is still fuming over the alleged rift she has with Ryan’s family, she isn’t showing it. Reports have leaked that Ryan’s family is not about him making it official with the blond bombshell even though the couple are living together in a newly purchased home outside of New York City. The facts that she’s “overbearing” and “career-oriented” have left a sour taste in their mouths since Ryan’s mom is still sore over the way Scarlett Johansson said adios to her golden son.

Blake doesn’t appear to have a care in the world on that red carpet. I’ve never seen her look more beautiful or more like a Hollywood star. Sure, she’s done other movies like the Sisterhood of the Traveling Pants franchise and Ben Affleck’s The Town, but this is like her coming out party. Early reviews say she didn’t suck. Granted, I think she just had to look hot for the majority of the film, but people are saying she did her job well. It’s almost like she’s defiant on the red carpet saying “Ya, I’m not the best actress but just try to say something nasty about me in this dress.” And I can’t. That’s the problem with jaw-droppingly gorgeous women. They blind you with their crazy beauty!

Check out the gallery below. Is this the best Blake’s ever looked? I also dropped a few pictures of co-stars Salma Hayek and John Travolta. Salma disappoints me in her teal gown. You would have thought she would have brought more since she knew Blake would turn it out. But maybe that’s precisely why she didn’t. And I almost forgot Travolta was in the movie. He’s dealing with his sex allegations at the moment, but that didn’t stop him from sucking face with wife Kelly Preston trying to convince everyone she doesn’t want to stab him in his cheating heart with her Jimmy Choos. Can anyone get more transparent than Travolta? If he didn’t try so hard to convince us his hair and his marriage were healthy and real then I wouldn’t pick on him so much. How could Tony Manero have so little confidence?

Tell me what you think of Blake’s dress and Travolta’s acting? Both hits?