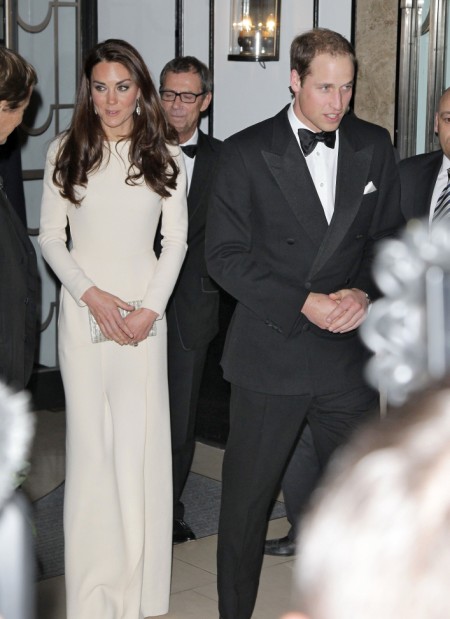 With everyone and their mom shuffling through pictures of Kate Middleton’s tatas today, the baby bump watch has thankfully taken a back seat. But it’s still the prevailing thought, right? Kate nixed wine for water a few times and presto she’s pregnant which now brings the topless pics into a whole new light because Closer magazine is saying it didn’t publish all of the pics taken two weeks ago. And unfortunately for Kate, she’s smoking in some of them.

Lainey Gossip brought the smoking pics to  my knowledge. I’ve known she was a closet smoker for years but sources said she kicked the habit after the royal wedding because Prince William has always hated it and a princess puffing on some Camels doesn’t have that fairy tale quality to it.

Now we must take into consideration that we don’t even know if Kate is pregnant. By looking at the photos, I certainly don’t think she is. However, Tom Sykes at The Daily Beast writes: “Royalist has been hearing unconfirmed rumors of late from the Royal circle that Kate is pregnant, with one source saying that Kate was pregnant, but that William and Kate were planning to hold off announcing a pregnancy for ‘as long as possible.'”

So how do you think the public will feel if Kate’s smoking in the early stages of her pregnancy? There are different standards, right? In America, smoking cigarettes has been likened to shaking hands with the devil whereas Europeans are more casual about it. So it’s no big deal, you say.

But is there a double standard for the cameras? Kate’s staying away from wine. That could be because it was too damned hot in Singapore, or she’s been too tired over the jet lag or just because she doesn’t handle alcohol well and chooses not to drink in public often. All reasonable answers. But, again, the prevailing belief is that Kate’s staying away from alcohol because she’s already pregnant or is readying her holy chalice for the chosen one. It’s also not a big deal in Europe to drink a little alcohol when pregnant. So why follow one guideline and not the other? Well, the answer probably is because she just damn well feels like it. That’s her prerogative and it’s cool with me.

But I doubt the Queen will be happy if those pics surface. She’s totally along for the Kate pity party now because the royal couple was rudely snapped sunbathing during its private time – nothing crazy or scandalous. As I’ve said, the pics are actually cute. But the Queen comes down hard on the royal women who smoke. Apparently, sources say she’s easier on the boys like Prince Harry but isn’t a fan of Prince Andrew’s daughters lighting up and has leaned on them to quit.

So there could be some nasty, judgey, b-tchy days ahead for Kate. If it turns out she was pregnant and the pictures surface, it won’t be her finest hour. But, really it’s better to get a “scandal” done nice and early methinks. She’ll weather it and move on. Once she gets pregnant this will all be forgotten. The chosen baby saves all.

Mostly everyone has sympathy for Kate now but do you think she’ll get some backlash if it turns out she was pregnant when the pictures were taken? Do you think the Brits will care or is this mostly just an American taboo?