Prince Harry And Kate Middleton Are Using Each Other 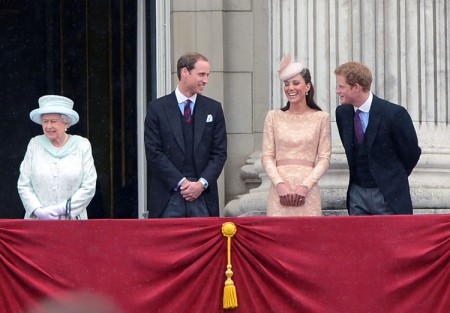 Kate Middleton’s foray into royal life may seem like it has gone off without a hitch, but sources say her comfortable fit with the Windsors has a lot to do with her strong relationship with Prince Harry. The two use each other for entertainment during the boring bits and even for advice when navigating the royal waters gets a bit… harry.

“As he puts it, the ‘in-law’ part isn’t necessary when he’s describing her. He sees her more like a sister,” a source told Us Weekly. “He often turns to her for advice — they’ve always been close.”

Kate started dating Prince William when she was around 19 which means Harry was about 16-17. That’s a long time to know someone. They kind of grew up together. Kate’s known Harry through his Nazi days and been a shoulder for him to turn to through all his Chelsy Davy problems. Yes, he has loads of female cousins, and he’s super close to Zara Phillips, but they’re still family. Kate is his sister, but she’s also an outsider who didn’t grow up with all the royal trappings. I’m sure he really values her opinion.

But Harry knows how to pay back a favor and he keeps Kate laughing on the balcony in between whispering exchanges that always causes a few eyebrows to rise – including William’s on occasion. “She loves his sense of humor,” said the source. “He makes her crack up all the time, even when it’s not appropriate.”

I’m guessing the balcony appearance during the Jubilee celebrations wasn’t appropriate, but who cares, it’s Harry! He can do no wrong! What an amazing ally for Kate to have. Harry’s turning out to be one of the most valuable assets that family has and people love him. If he says Kate’s all right, then others will feel the same way. That might not be the case for the senior royals who are giving Kate a hard time, but they’re just jealous because no one knows their names anyway!

The only thing that worries me about this friendship is that I don’t want Kate to get in the way of Chelsy and Harry. Those two were meant for each other. Kate might not mean to, but her star power is pretty intimidating. Who can compete with her Stepfordness? Chelsy and Kate have had to spend a lot of time together over the years and they’re not besties. They don’t hate each other, but the’re just different. Chelsy is more a Pippa Middleton type of girl. I don’t want Kate to steer Harry away from Chelsy in favor of someone more like her. We already have a Kate. I need someone in that royal house who’s going to keep me on my toes like Princess Diana did! Remember Kate’s practical. It’s rumored she once told Chelsy that boys will be boys and she should just look the other way when Harry strays. Chelsy didn’t follow that advice, thank God!

Do you think Kate and Harry’s relationship is a tad inappropriate or do you think it’s sweet that the two are there for each other?