Prince Harry Dumped By New Girlfriend Because He’s An Embarrassment 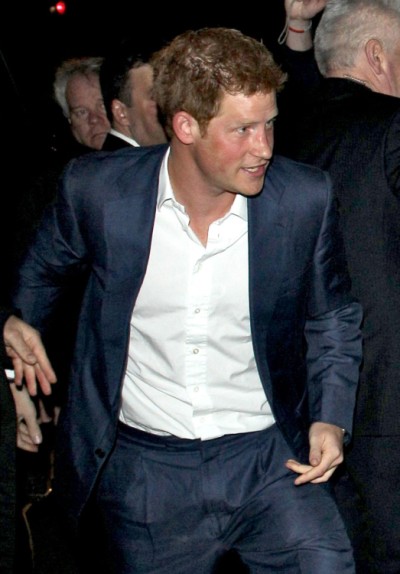 When it rains it pours and Prince Harry’s standing in a monsoon with no umbrella and now no girlfriend. Cressida Bonas is said to be so embarrassed by the media scrutiny involving her ginger prince she’s cut him loose from her life. I think it has more to do with the fact that he was cheating on her and now the whole world knows.

Apparently they haven’t broken up yet but a friend of the model heiress told the Daily Mail: “He’s ruined his chances now. Harry has blown it. Cressida saw a future with him, but he clearly isn’t as serious about her as he claimed to be. The relationship was pretty low key to begin with, but some of Cressida’s friends say it won’t get off the ground now. Cressida is pretty peeved.”

I’m sure that’s an understatement. See, this is why I love me some Chelsy Davy. Harry’s ex-girlfriend would have been like, “Dude, you’re a dumb ass and don’t bother calling me.” She would have gotten back together with him five minutes later but she would have made him work for it. Cressida is talking big now but I doubt she’ll throw a chance at royal life away over a little naked billiards scandal. Come on! Where’s the follow through?

But you have to wonder about the seriousness of this relationship to begin with. Before Harry and his mates wrecked their reputations in Las Vegas, they were partying on Necker Island with Cressida and her friends. Apparently Harry and Cressida were acting like a couple which means they were drunk a lot and making out. But then he left her to go off to Las Vegas. How did that conversation go down? “Ya, babe, me and my mates are going to Vegas to gamble and lounge at the pool. That’s it. It’s going to be chill I swear.” Did she honestly think he wasn’t going to cheat? I’m sure she didn’t think he’s get caught naked with his hands on a chick’s boobs, but monogamy? Does she have any idea who she’s dating? One of the reasons Chelsy and Harry broke up so many times is because he couldn’t keep it in his pants. Is she p-ssed he cheated or that he got caught? The way she answers that question will show me if she’s ready to be a royal girlfriend.

Because this is a case of what would Kate Middleton do. Kate would keep silent and turn the other cheek. She would bide her time and wait for her prince to get his kicks and come to his senses because ultimately she knows she has the history and is the better catch. She’s the bonafide. I kind of think that’s what Chelsy’s doing right now. If Cressida wants to be a royal plus one she has to learn this is a way of life for these people. Royals f-ck up and they cheat on their spouses. She’s a blueblood. She should know the game. And she should know Harry. Did he fool her along with the world in thinking he had turned a page and was a responsible senior royal ready to settle down and start a family like his brother? I almost feel sorry for the girl – almost.

Do you think it’s right for Harry’s girlfriend to give him his walking papers or is she overreacting? Isn’t it the duty of every royal significant other to look the other way?