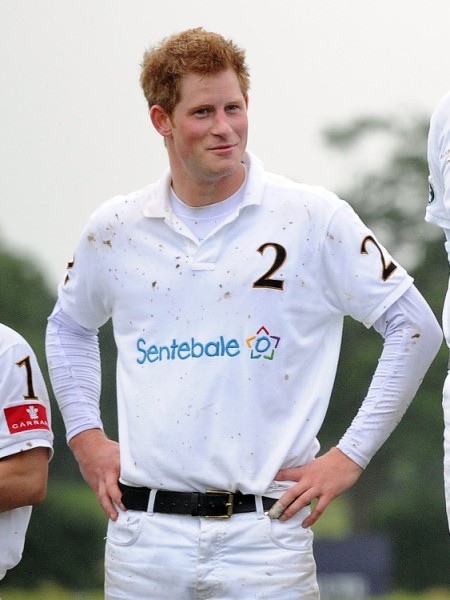 Prince Harry’s back in Afghanistan. Good. Great. I’m not going to knock him for having courage or wanting to fight for his country. But… is the timing suspect? St. James’s Palace announced the scandal-happy prince will spend four months in Helmand as an Apache helicopter pilot. That was quick. Two weeks ago his hands were all over his junk and a slutty chick’s boobs, now they’re on a joystick? Considering Prince Harry’s been whining to go back to war ever since the media blew his cover in Afghanistan in 2008 and he had to return home early, did he just get rewarded for screwing up in Las Vegas?

It definitely looks like it because shipping him off to the front lines is not a punishment for Harry who has made it very clear he wants to be a soldier that fights alongside his men. According to The Sun, Harry has said in the past, “You become a very expensive asset, the training’s very expensive and they wouldn’t have me doing what I’m doing. I count myself very, very lucky to have the chance to fly helicopters, and even luckier to have the chance to fly the Apache. It’s a fantastic piece of kit, it’s like flying a robot.”

Naturally, The Sun reports that Prince Charles is “immensely proud” of his son and is even concluding that Harry’s deployment “may explain why the prince was so keen to let his hair down in America.”

Oh come the f-ck on! Stop spinning! Harry didn’t get what he wanted so he pouted. He pouted and he grew lazy with his rich, dumb ass friends which led to the f-ck up in Las Vegas. He embarrassed his family so much the only thing it could do was send him off so he wouldn’t get in anymore trouble. It’s a win/win. Harry gets what he wants and the family doesn’t have to worry about him. Oh, and now he’s considered a hero again. What a difference two weeks make! And just to be extra cynical, how convenient is his absence if a video surfaces? The royals might be inbred but they aren’t dumb. But neither are we! Don’t play us with this “Harry wanted a last hurrah before getting deployed” nonsense. Harry got caught acting a fool and the royal family is placating him to settle his tantrum. Case closed.

The only loser in this whole situation is Kate Middleton. Who’s she going to hang with now? How great if she has a baby in nine months! Then people like me will say Harry gave her a special good bye gift! That’s something to look forward to I guess, since without Harry, the next four months are looking pretty boring.