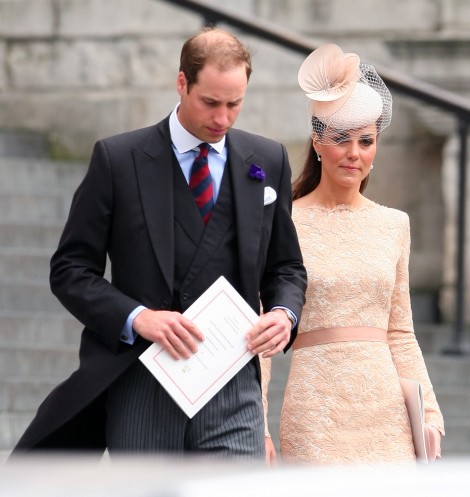 Prince William and Kate Middleton won in court today in a ruling that states Closer magazine cannot publish or sell the intimate photos it printed of the royal couple while on vacation. You’d think he’d be jumping for joy. But maybe William remembered there’s this thing called the internet and all the photos of his topless wife are on it and they will be found on there ’til the day she dies. Is that why he’s still sulking in his grief?

Because William is still angry but this time he’s pointing the finger at himself. “He’s furious and he also feels guilty. If Kate wasn’t married to him she wouldn’t be facing this. He saw how his mother had to cope with that kind of attention and it’s the last thing he wants Kate to have to go through,” a source told Now magazine.

Oh, here we go again. Poor Kate. Her life is so hard. People take pictures of her and then she gets to scale mammoth trees in Borneo and travel to dreamy, remote islands to snorkel. It’s like I said before, I will not feel sorry for Kate. She caught a raw deal this past week but there are some real tragedies happening in the world, and getting papped topless while relaxing in the south of France isn’t one of them.

You’ll remember, we discussed the problems of evoking images of Princess Diana in this situation. William went there fast and had no problem dragging up his mother’s death to create sympathy for his wife’s predicament. He’s the one who encouraged the comparisons and he must have written the playbook for his lawyer today because some of the statements he made were kind of crazy.

The couple’s lawyer, Aurelien Hammelle, naturally compared the photographer’s invasion to the same hounding Diana faced. The royal family has been doing that since the photos came out so that wasn’t too shocking. However, he took it so much further when he pointed out the pictures of Kate were taken, “just six days after the 15th anniversary of the useless, cynical and morbid hunt which led to the death of William’s mother.”

Now seriously, what the hell does that have to do with anything? Who was on trial here? Paparazzi? Closer Magazine? France? No one was ever really held accountable for Diana’s death. Does it feel like William is using this trial to shine light on his mother’s tragedy and keep his wife safe? Is that fair? Regardless, it worked and he won but it just feels a little overblown. It’s like William has had a vendetta out for awhile and used this episode to make the biggest statement possible. If laws get altered and things change then maybe it was worth it but I’m not too sure yet.

Do you think William took all of this so seriously because he does think he’s to blame. He’s obviously the seasoned royal in the couple. He tells Kate to jump and she asks how high. For a dude as cautious and suspicious as William’s known to be, it does seem odd he let his wife parade around outside without her clothes on. He obviously liked the view. Perhaps he’s angry that his weakness for Kate’s T and A created the lapse in judgement. I’ll give him that, sure. But hopefully he learned his lesson because there will be no second chances for Kate Middleton who now must live by the old saying, “pap me topless once shame on you, pap me topless twice, shame on me.”