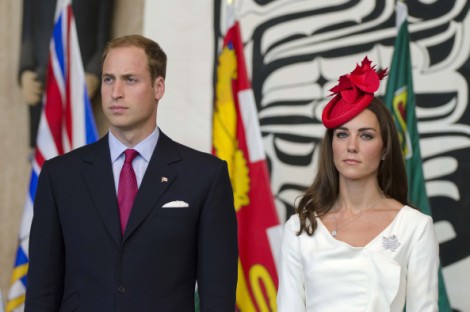 Kate Middleton’s boobs are all anyone can talk about. And I do feel sorry for her. I really do. It sucks that this had to happen, especially while on tour. All her orchid watching and hand shaking will certainly play second fiddle to the scandal. Naturally, the palace is OUTRAGED! It’s FURIOUS! It’s SADDENED! It’s… talking about Princess Diana’s car crash more than it ever has. Kate and William are dumb asses but are they savvy dumb asses?

YES! Yes, they are. I feel for them but I still think they should have known better. I’m sorry Kate but this is the price you pay for getting the crown. Some might consider it an even exchange while others wouldn’t consider it worth it. But this is what you signed up for. The saying is “When in Rome” not “When in France”.

It’s an honest mistake and Kate and William are paying for it. What’s kind of gross to me is how ready the palace was to throw out the Princess Diana dead card. They don’t do it very often but today it’s all up in our faces. St. James’ said: “The incident is reminiscent of the worst excesses of the press and paparazzi during the life of Diana, Princess of Wales, and all the more upsetting to The Duke and Duchess for being so.”

And then a royal source told The Mirror the scandal, “turned the clock back 15 years.”

As I mentioned yesterday, Princess Diana’s boobs were public too but the palace isn’t mentioning that. No, the source said “15 years ago” which clearly references the tragedy (in Paris coincidentally). So Kate and William aren’t as upset about the invasion of privacy as they are about the invasion bringing up memories of William’s mom? Oh, that’s good. Indignation is better than embarrassment.

My question for you is if it’s good PR strategy to make Kate Middleton the victim? Kate Middleton as Diana? I’m not so sure. It’s such a different tune from the palace and very William. We’re getting some revisionist history here. So Princess Diana didn’t court the media? She didn’t sit on the edge of a yacht in her bathing suit? She didn’t use the paparazzi to get back at Charles and the royal family for how they treated her? That used to be the palace’s underlying message.

Now, it’s true, Kate doesn’t seem to woo the press as Diana did, but when every effort has been made to distance her image from her mother-in-law’s, why compare the two now? It’s so evident today. The Sun actually has old pics of a demure, barefoot Princess Diana wearing a headscarf next to a pic of Kate doing the same today while visiting a Mosque. It’s a nice touch. Diana and Kate wearing white like innocent virgins.

I just can’t help but think the palace is desperate and climbing a slippery slope. William has made it clear he doesn’t want his wife to be compared to his mother in any way yet you know he signed off on this. He can’t have it both ways. Is it too heavy handed? Did it just set Kate’s independent image back years?