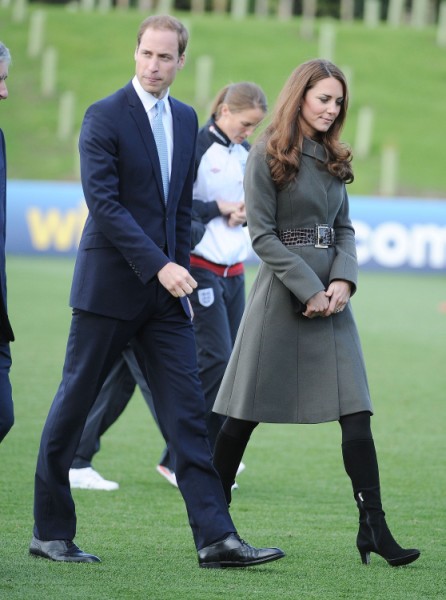 I’m really beginning to think Prince William and Kate Middleton’s police guards are some of the most incompetent people in the world. How else do you explain the topless (and bottomless) scandal? And now they have something else to put on their woefully inadequate resumes. Last night Kate’s royal protection officer fired his gun outside Kate and Will’s home in Anglesey. He was apparently sitting with another guard in an unmarked car outside the home. No one knows for sure if Kate was inside the house but it would seem likely since she lives there and he was outside. Why would he watch a house if no one was home?

Let’s be fair I guess. These things happen, right? The Telegraph reported that the same thing happened to Queen Elizabeth and Prince Philip in 2000 when they were on a train. I wonder if those guys kept their jobs…. At this point the royals really need to look into their security a little more. The guys babysitting Prince Harry in Las Vegas got thrown under the bus for allowing pictures to be taken of the dumb ass prince doing dumb ass  things. Sure, Harry was to blame but it’s Harry’s job to be stupid and it was the guards’ jobs to make sure no one found out.

Then we have Kate Middleton’s naked scandal. The guards got a lot of flack there for not making sure the area was clear for Kate’s boobs. A lot of people even pointed out that the photographer could have easily have been a sniper. Sure, Kate should have kept her clothes on but it’s Kate’s job to get a tan everywhere and it’s the guard’s job to make sure her vadge has all the privacy it needs outside in the middle of the day.

And now the inept guards are letting off rounds in the middle of the afternoon while Kate’s busy brushing her hair? or making lunch? or working out? or maybe talking to Pippa on the phone? Any number of those important activities would have gotten sidetracked by the gun shot! I don’t know much about guns so fill me on… how does a gun just go off? Why was it even out of its holder thingy. Was the guard cleaning it? Was he playing around with it in the car? Was he trying to pick off some birds? Or were Prince William and Kate Middleton in danger?

Do you think Kate’s police guard should be fired for firing his gun outside her house or do mistakes just happen? In a royal family where  order and ceremony are the name of the game, are mistakes ever taken lightly?