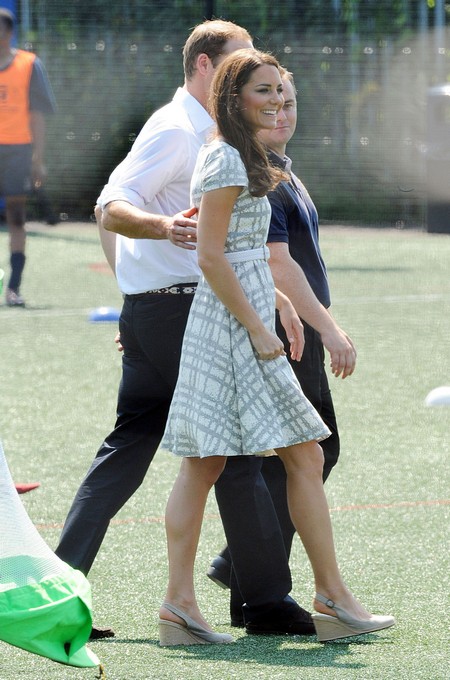 Prince William has been forced to come to his lovely wife’s defense once again. Kate Middleton has come under attack from a drunk and jealous Camilla Parker-Bowlesover the release of stunning and sexy photos. When revealing honeymoon photos of The Duke and Duchess of Cambridge were released by Woman’s Day Australia a few weeks back, Camilla went insane.  The previously unreleased photos display gorgeous Kate in sexy bikini poses revealing her slim and toned physique. When Camilla saw these pics, which show off Kate’s incomparable figure, she practically had apoplexy and ran immediately for the bottle!

Camilla once again used alcohol as a nerve tonic and after getting good and drunk appealed to Prince Charles to use his influence to attempt to have Kate’s sexy photos banned. Her ostensible reason for wanting Kate’s photos suppressed was that they degraded and embarrassed the royal family.  Of course the truth is that Camilla was just insanely jealous of Kate’s ‘fabulous figure.’ An insider reveals: “The truth is Camilla just couldn’t bear the thought of people comparing her to Kate and making snide remarks about her dowdy appearance.”

GLOBE Print Edition, August 6 tells the story of how cruel Camilla reacted to learning that Kate had once again captured the spotlight:

In a fit of drunken rage Prince William’s jealous stepmother accused her arch rival of ‘embarrassing’ the royal family by flaunting her dazzling body on sun-drenched beaches.

Palace sources tell GLOBE the 65-year-old Duchess of Cornwall is so envious of 30-year-old Kate’s fabulous figure, she desperately demanded that new photos of the beauty be banned!

After the photos were published in an Australian magazine, Camilla’s friends down under bombarded her cell phone with text messages containing sexy snapshots from the printed pages.

“Camilla was furious and immediately grabbed for the bottle – even though she promised to keep her drinking under control in return for the chance to become the next Queen,” a source says.

“She branded young Kate a brazen Hussey and accused her of exposing herself in public and embarrassing the royal family. She made sure her Majesty heard about the honeymoon photos – and others which show William’s love in a bikini.”

“And she told William’s father, Prince Charles, he should take steps to stop the pictures from being published anywhere else.”

“William is outraged Camilla is using bikini pictures to humiliate his innocent wife,” another source tells Globe.” He even protested to his grandmother Queen Elizabeth about Camilla’s relentless campaign to smear Kate. Her Majesty was sympathetic she thinks the world of Kate and – despite public appearances – can’t stand Camilla!”

Camilla is some piece of work.  Imagine the gall on the woman – criticizing wonderful Kate!  Let’s remember that while Charles was married to Princess Diana he was carrying on a torrid affair with Camilla – and she was married at the time to Andrew Parker-Bowles!!  Let’s be serious here for a minute – if Kate posed nude for Playboy could it be more embarrassing to the royal family than the future King and Queen cheating on their respective spouses?