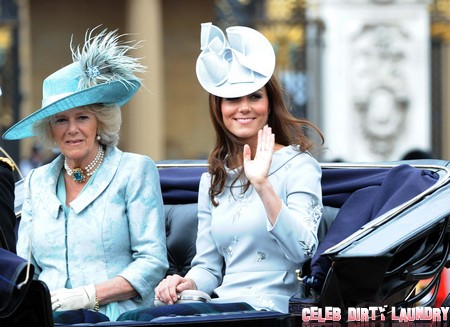 As the entire world knows, Kate Middleton’s boobs were photographed by an ambitious paparazzo and then displayed in various publications and all over the internet – including right here at Celeb Dirty Laundry. Prince William was outraged to have what he believed to be a private holiday on the snazzy estate of Queen Elizabeth’s nephew turned into an opportunity to snap revealing photos of the Duchess of Cambridge.  Of course the Palace expressed anger and outrage at this ‘invasion of privacy’ when French Closer Magazine was the first to publish the topless pics. Under the auspices of Kate and Will the royal legal team even made a show of filing criminal charges against the mag, and by association, the guilty photographer.  But you can’t put Jill back in the box, can you? Of course other mags followed Closer’s lead, eager to cash in on the popular interest in seeing the empress’s new clothes.

But Kate’s topless photos, however outrageous you may consider them, turned out to be just the beginning of the scandal. On September 27th the complement to the topless photos made their way to the internet.  Yikes!  These photos show Kate’s Queen Victoria in full bloom. When Closer editor, Laurence Pieau, said that her mag had used taste and discretion in their publishing and that far more intimate pictures existed she was serious.

With this as a backdrop consider Prince William’s rage when his evil step-mother, Camilla Parker-Bowles, went on the offensive against his beloved Kate!  As we reported here at Celeb Dirty Laundry last week, GLOBE Magazine exclusively exposed how Camilla put the boot in and tried to crush Kate as she was reeling from the shock of having her nakedness shown to the world.  Camilla sees Kate as a hated rival and used the photo scandal to try to make her feel worthless.  Camilla has never missed an opportunity to remind Kate of her commoner background and even insists that Kate curtsy to her whenever William isn’t around.

But according to the October 8th print edition of GLOBE, Prince William has prepared an antidote to Camilla’s poison.  “William directed a team to dig for dirt on Camilla about eight years ago when it was clear that she and Charles were a couple,” a palace source tells GLOBE.   Allegedly, William has an entire dossier of shame on his wicked step-mother! William has never trusted Camilla and for good reason.  Camilla and his cheating father, Prince Charles, carried out a long creepy affair while his dad was still married to his loving mom, Princess Diana.  20 years ago, when Will was still a royal lad, transcripts of conversations were made public in which the future King of England expressed interest in being Camilla’s tampon.  Yes, that was a bit of a hurdle for the monarchy to hop.  But time seems to have the power to ameliorate the public image of dirty rotten scoundrels, at least when they are celebs.  This revisionism is no fault of Celeb Dirty Laundry – we never forget!

And what is this medicine that will certainly silence cruel Camilla?  Get ready for it… Camilla Parker-Bowles took a lesbian lover! GLOBE reports that a security camera recorded a video of Camilla and her female lover kissing! Now how do you think that will go over in Buckingham Palace?  Do you think the Queen is ready to open the monarchy to the LGBT community?

I don’t want to give away all the details so I suggest you read your copy of GLOBE.  With GLOBE you get to see what really goes on inside the Royal Family.