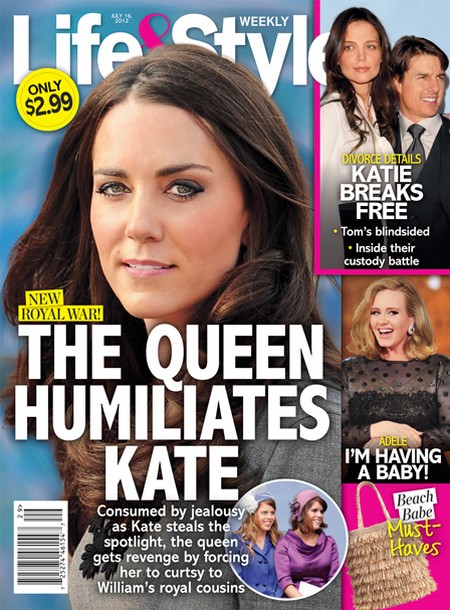 Kate Middleton has been put in her place by Prince William’s grandmother, Queen Elizabeth II! As we reported last week on CDL much of the royal family was put off by the prominence of Kate during the Queen’s Diamond Jubilee celebrations. After getting hold of the monarch’s ear Elizabeth was persuaded to announce the enforcement of a rule:  Kate must curtsy to the blood prince and princesses whenever hubby isn’t around.  This repulsive ritual – the curtsy – is designed to show that Kate is merely a princess through marriage whereas Prince Andrew and Sarah Ferguson’s two daughters, Princess Beatrice and Princess Eugenie are born of the royal blood.

This week’s edition of Life & Style has the cover story ‘The Queen Humiliates Kate’ and although we disagree that Elizabeth’s motivation was personal jealousy of Kate’s popularity, they are right about this protocol being a humiliation.  We are pretty sure that the pressure came from less popular, high ranking senior royalty – they are totally pissed off that Kate is so great and so popular.  Kate will handle this insult and let’s remember… Kate will one day be Queen sitting beside Prince William as King!

Life & Style reports: During Queen Elizabeth’s recent Diamond Jubilee celebrations, all eyes were on Prince William’s wife of 14 months, Kate Middleton, who appeared to be embraced as a member of the family. But just weeks later, Kate has been delivered a slap in the face.

In an official revision to the Royal Household’s Order of Precedence, Kate, 30, is now required to curtsy to Prince Andrew and Sarah Ferguson’s two daughters, Princess Beatrice, 23, and Princess Eugenie, 22. Why? They’re considered blood princesses, while Kate merely married into the royal family.

“It’s a total humiliation for Kate,” a source in Kate and William’s social circle confirms to Life & Style. “It’s like a demotion for her in the royal family, and the queen is the one who ordered this.”

Even more insulting, when William’s with her, no curtsy is necessary — but if she encounters them without her husband by her side, she has to bow down, whether in public or private.

“These moves from the queen are designed to remind Kate that just because she’s popular, she isn’t as important as the queen or any other royal-born family member,” a friend reveals.

Life & Style also talks about Adele’s pregnancy and the Tom Cruise – Katie Holmes divorce on the cover – no big surprise about that.

What do you think?  Is Kate Middleton your favorite royal?  Let us know in the comments below.