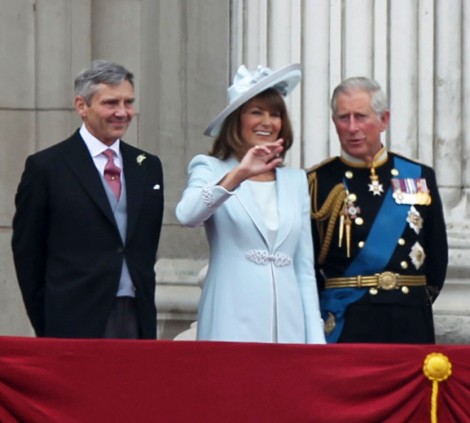 The Middleton invasion is almost complete! By now you’ve probably all heard that Queen Elizabeth threw out an invitation to Kate Middleton’s parents, Carole and Michael Middleton, for Christmas dinner. If it’s true (and who really knows) it would be a big freakin’ deal since usually only the royal family is allowed to celebrate Baby Jesus’ birthday at Sandringham. Is the Queen just trying to make things easier for Kate since she’s not feeling well (but hopping from party to party) or is she sending a message to the lesser royals that times have changed?

This invitation/message couldn’t have come at a worse time for Princesses Beatrice and Eugenie. They’ve been thrown out of their posh digs. Well, not really, but they’re going to have to start paying for them at least. The Daily Beast reported that Prince Andrew’s daughters will have to shell out $30K/year to stay in their four-bedroom apartment in the heart of London at St James’s Palace. But don’t cry for these college educated, jobless, royal girls. Daddy will pay for it and he’s getting off easy. Real estate agents have estimated that the going yearly rate for those apartments is closer to $150-$200K a year. But I doubt that’s calming Andrew. He’s been in a tizzy ever since Charles chose to slim down the monarchy and his and her daughter’s work for the Queen. The Princesses were told to get J-O-Bs! Oh the nerve!

So I’m wondering how merry this Christmas will be with the Middletons in tow. Tensions probably run high regardless  – these people are like wolves with each other. Throw in the Middleton connection and things might get interesting. Although I don’t know why so many people are surprised by the invite. The Queen has catered to the Middletons for awhile now, including them in her Jubilee celebrations and other functions. They might not be in the circle of trust but they’re close by. They raised Kate and the Queen loves Kate and wants her present at Christmas. Who did Andrew ever bring into the family? Fergie – enough said.

Do you think there’s resentment from the royals on the Queen Elizabeth/Middleton Christmas invite? Is Kate being catered to a little too much?