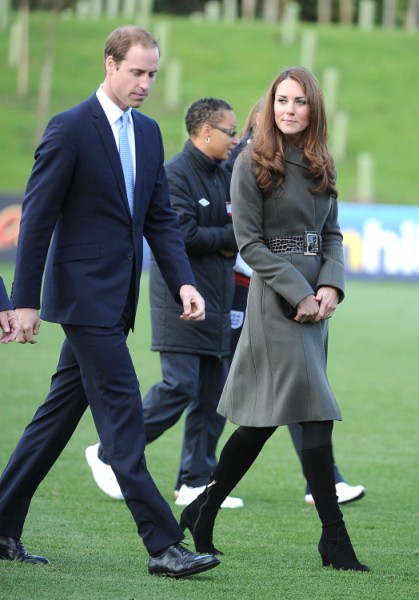 I thought Kate Middleton and her parents were behind the whole “I can’t make it to Sandringham this year for Christmas because I want to stay closer to the hospital which just happens to be closer to my parents’ house” routine. But, according to Radar Online, I was way off. Radar put a spin on the Christmas story today and insisted that it’s Prince William, not Kate, who’s against holidays with the in-laws and it’s causing all sorts of little scuffles for the royal couple. Kate absolutely must make it to the annual Christmas dinner! She looks at it as one of her major duties and nothing, not even William, can stop her! Geez, I just got goosebumps. This is some important stuff!

“Kate doesn’t want to disappoint the Queen, nor does she want to skip on her duties,” a source said. “She feels she is obliged to appear at the annual Christmas dinner — her first as the Duchess of Cambridge and doesn’t want to let anyone down. William has his concerns though that she won’t be up to it, and told Kate she shouldn’t worry if she feels too sick to attend and that no-one will judge her negatively. Also, with Harry in Afghanistan for the holidays, William believes the meal will be less formal than in previous years and his grandma wouldn’t mind if Kate was excused. But Kate isn’t having it and is determined to be at the dinner, smiling as always.”

Can someone please explain to me why Harry being absent would make a royal event less formal?

I could totally see this conversation play out though. Perfect Kate, who’s so insistent to stay on the Queen’s good side, would hate to step out of line. She’s already had one royal blunder this year. In her mind, she can’t afford another one for at least 30 years. And William’s all like, “Babe relax. It’s just dinner.” But to Kate it’s not just dinner. It’s tradition and she’s the last person who’s going to balk ceremony right about now or ever.

But the case can be made if Kate was feeling well enough to attend the annual Household Christmas party in Notting Hill a couple days ago than why can’t she make it to Christmas dinner? William and Kate surprised their staff by showing up at the party and a source there said she looked the “picture of health” whatever the hell that means. It means she can get through a luncheon without gagging the entire time. But I wonder if it’s a timing thing. The office party luncheon couldn’t have been that long and I’m sure William and Kate didn’t spend hours over pints gossiping about Camilla. It could have been a quick in and out – just like the sports awards show Kate presented at earlier this week. The family dinner probably DRAGS and everyone’s forced to listen to Princes Andrew and Philip one up each other with war stories. William’s supposedly uber protective of Kate. Perhaps he’s pushing so hard for her to stay in Berkshire because he doesn’t think anyone should have to sit through that. It’s kinda sweet.

Are you surprised to hear Kate Middleton fights with Prince William over anything, let alone Christmas? Kate Middleton is a trooper though. You can’t say she isn’t trying!