Real Housewive’s of Miami’s Elsa Patton Might Be A Seer But She Sure Isn’t A Looker! 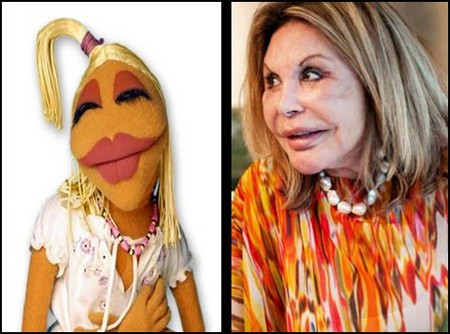 Hands down the breakout star of The Real Housewive’s of Miami is “Mama” Elsa Patton. The majority of the other ladies thrive on gold digging, clinging to shady men or, well, both of those things. Elsa is brassy and probably nuts but her brand of crazy is proving to be unique and entertaining. She freely admits that she never really had a career or much going on in her life.

Her daughter Marysol is also on the show, a smart, shrewd business woman that just divorced husband number three. Elsa claims to be a “seer” meaning she picks up on things with people and can (kinda sorta maybe) predict the future. The other housewives flock to her for readings and advice which strikes me as hilarious.

Elsa drinks a lot during the day and maybe that is why her magic powers seem to be a bit off, but- and here’s the thing- if she could predict the future in advance, would her daughter have had three marriages?  Wouldn’t she have been able to clue her in to the notion that NONE of these guys were the best match?  Marysol Patton recently spoke of Elsa’s magic saying,

“It’s hard. For me, the word “psychic” sounds so cheap. I feel like it’s a flashing sign and a place you walk into with a bell on the door, and you have to pay, and it’s not something my mother has ever made money from. It’s just something, if she’s with somebody or talking to somebody on the phone, and she feels something, she’ll just tell them. She can’t just turn it on and turn it off. It’s just something she was born with. I think we all have it, we’re just not as in tune.”

On a really personal level, have you gotten a good look at Elsa’s face? Of course you have because if RHOM is on two rooms away and you happen to catch a sideways glimpse you’ll still see the worst plastic surgery botch job ever (I hope.). Didn’t Elsa getting a feeling that the doctor that she was going to would ultimately turn her into a muppet with nerve damage to boot? Seriously now, this is not someone that I would want to read me unless my intention was to do the opposite of what they said!

Still Elsa will no doubt keep us entertained throughout the entire season. According to her daughter she has filmed a lot which means lots of airtime I’m guessing. Do you trust Elsa’s abilities? Tell us your thoughts in the comments below!