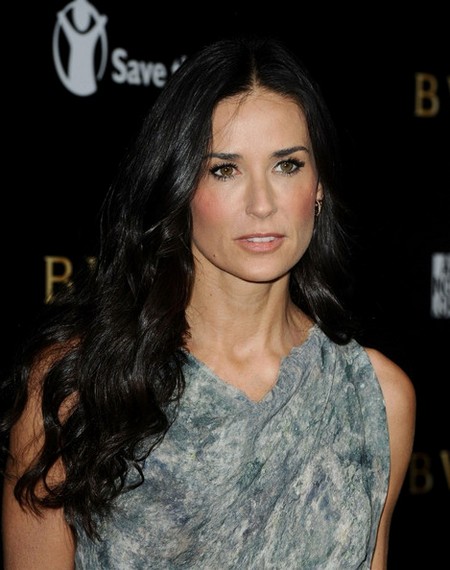 Demi Moore is not out of the woods yet as her friends fear that the troubled star is heading rapidly for another mental breakdown.  Demi’s pals feel the aging star is in danger of suffering another shattering collapse because ex-hubby Bruce Willis just had a baby with his young wife, Emma Heming.   A close friend said: “I think all those around Demi fear Bruce’s new arrival could trigger a relapse for her.  Demi sees herself turning 50 later this year and still being very, very unhappy.”

Demi was suffering from drug addiction and anorexia when she collapsed and had to be rushed to hospital emergency with drug-induced seizures on January 23.  But her short stint in rehab has not come close to helping Demi solve her deep psychological problems.

Demi feels that her life is a failure largely due to her obsession with staying young – which is of course impossible!  Losing Ashton Kutcher to a series of hotter and younger women crushed most of what remained of Demi’s fragile ego.  Sources say: “Seeing Bruce with this new miracle in his world just drives home all the more what might have been with Ashton.”  Now Bruce’s happiness and fulfillment stands in stark contrast to her own emotionally vacant life, superficial partying and grasping juvenile behavior.

GLOBE Print Edition April 30 has the details:  Demi, 49, instantly called the 57-year-old Die Hard hunks to congratulate him and his wife Emma Heming, 33, on the April 1st birth of Mable Ray.

But sources believe the happy event spells more trouble for the Indecent Proposal actress, still heartbroken over the collapse of her marriage to Ashton Kutcher, the 35-year-old star of Two and a Half Men.

“As soon as she heard about the baby’s birth, she called Bruce to tell him how happy she was for him and Emma,” says a friend. “But when Bruce invited her to come over to see his new daughter she told him she just wasn’t up to it.

The friend tells Globe that demi-mom of daughters Rumer, 23, Scout, 20, and Tallulah, 18, with Willis-dreamed of having a child with the 16 years-younger Kutcher, whom she wed in 2006.

“She truly believes the two of them would start their own family, that she would be the one to give her daughter’s a little sister or brother,” the friend says. “But she had trouble getting pregnant.”

Then her life unraveled last November when she split from Kutcher amid reports he cheated with 22-year-old Sarah Leal on September 24, the date of his sixth wedding anniversary to Moore.

The breakup devastated the Striptease beauty and her life “really went off the rails,” the friend says.  She began hitting Hollywood hotspots with daughter Rumor “seemingly trying to relive her youth,” the friend says.  On Jan. 23, the actress was rushed to a hospital following a 911 call and claims she suffered seizures after smoking a marijuana-like substance and may have inhaled nitrous oxide.

A week later, she checked into rehab for four-week stay for what her reps called exhaustion.  Little Mable’s birth has come just one month after Demi left Utah’s Cirque Lodge rehab facility and while the Ghost actress is still in a fragile state, say sources.

“We are worried about her,” says the pal. “She needs a lot more therapy before her life is going to get back on track.”

So there you have it.  Can Demi finally grow up and behave like an adult?  Or will she go back to partying with people less than one-half her age and cruising young guys?  Remember that Demi was partying with Rumer the night she collapsed and was trying to sleep with Zac Efron in the days leading up to her overdose.   Will Demi survive on the outside if left to her own devices?  Let us know your opinion in the comments below.