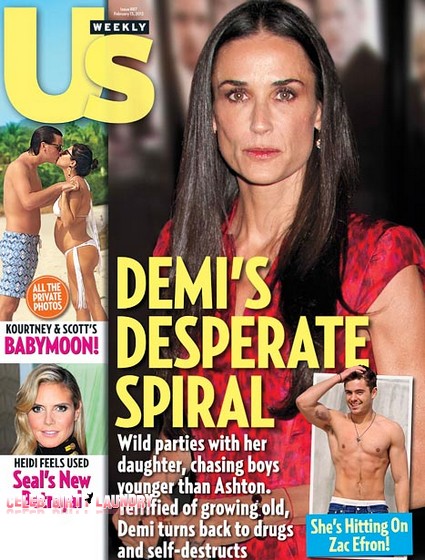 The current issue of US magazine features a cover story revealing that Demi Moore tracked down Rumer Willis’ boyfriend, Zac Efron, and partied with him prior to the emergency 911 that saw her hospitalized due to her recent drug overdose. Of course Rumer is Demi’s daughter but that neither stopped her from hitting on Rumer’s BF nor did it stop her from partying with her daughter while using deadly illegal drugs.

It seems that Demi just can’t deal with the fact that she is middle-aged – she is desperate to ‘stay young’ which in her twisted mind means having young men, being skinny, and partying like a fool. So we see her getting dumped when Ashton Kutcher chose sexcapades with Sara Leal, anorexic and hooked on Adderall and Red Bull, and overdosing on party drugs. Now she is flirting with Zac according the a source for US. Dose it get any more pathetic than this?

According to US the night Demi was rescued by EMTs was even scarier than it sounded on the 911 call. The mag also chronicles Demi’s desperate attempts to stay young.

“Everyone thought she was going to die,” a source tells the new Us Weekly of the emergency, in which Moore, 49, collapsed, and was “convulsing” after smoking an unknown substance.

It was the culmination of months of self-destructive partying (and drug use) for the newly single star, struggling to make sense of things as she nears 50 without husband Ashton Kutcher, from whom she split late last year.

“She’s been really down, and she’s surrounding herself with young people to make her feel better,” an insider tells Us of Moore, who’s been obsessed for years with staying young and thin.

“She’s been mixing pills and Red Bulls, among other things,” another source says.

One of Moore’s favorite young stars to party with — and flirt with — is daughter Rumer Willis’s longtime friend Zac Efron, 24, a hunk nine years younger than Kutcher, 33.

A wired, gaunt Moore “tracked down” the High School Musical star at a party in L.A.’s Venice neighborhood, an insider tells Us. “She seemed out of her mind at this party.”

Demi has a long history of going after men much younger than herself – could she be targeting Zac?