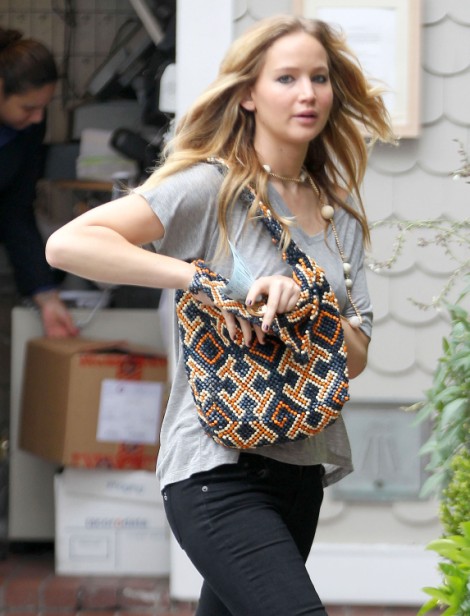 In sad and truly mind-boggling events, it looks like Jennifer Lawrence’s days with her X-Men co-star are limited. Star magazine reports that Jennifer and Nicholas Hoult may be calling it quits after two low-key years together. Apparently they are living separate lives and friends insist the pair, “won’t survive the end of the year.”

Bummer. I tell myself time after time never to get attached to celebrity couples – especially young ones. I’ve gotten my heart smashed by the likes of Johnny Depp and Winona Ryder, Britney Spears and Justin Timberlake, and of course you might all remember Kristen Stewart and Robert Pattinson. But I loved these two! She’s the vivacious, opinionated American and he’s the quite, pensive Brit. Match made in heaven! Or was it?

“They’re being pulled in different directions,” a source told the magazine (via Celebitchy). “He’s committed to spending time with his family in England before settling on his next role, and Jen is busy prepping for the next Hunger Games film. They’re saying that his stay-at-home habit is holding her back. It’s gotten her thinking that if he’s not willing to sacrifice even a little bit of time to be with her, why is she sacrificing her career to be with him?”

So since everyone and their mom are tossing their hat into the ring to date Robert Pattinson, why not Jennifer? Is the timing suspect? There’s no love lost between Kristen Stewart and Jennifer Lawrence. They fight for virtually every juicy role, why not men? And Jennifer just lost out to Kristen for the plum part in Lie Down in Darkness. Could Jennifer be thinking of a little emotional payback? Ya, I can’t back that up. It’s all wishful thinking. Would be awesome though, wouldn’t it? Think of the drama!

But I’m going to cry bullsh-t on the Star story, mostly because it’s coming from Star, and also because I really don’t want it to be true. How could Jennifer Lawrence break up with that kid from About A Boy? He’s too adorable! And I’m sure Jennifer is taking notes from Kristen on what not to do. Can you believe they’re the same age? Both 22, both headlining blockbuster franchises, both dating co-stars long-term (well, not anymore for Kristen), both vying for same serious parts. But I’m sure that’s where Jennifer would like to see the similarities stay, right? Nicholas Hoult isn’t half as popular as Rob (except in the highbrow circles I belong to) so Jennifer dumping him wouldn’t have nearly as crazy an impact but who she decides to rebound with will – especially if it’s someone as high profile as Rob.

So what do you say, should we start a Jennifer and Rob campaign if she decides it’s just not working with Nicholas? I had my heart set on Shannon Woodward for Rob but that could change if Jennifer becomes available. But I also still have my eye on Michael Fassbender for Jennifer. I know he dated one of her close friends and is a hot, drunken mess most of the time but they have chemistry. Have you seen pics of them at parties? Hilarious! Yes, the more I think about it, the more I like it. He’ll end of breaking her heart but she’s 22. She’ll rebound. Oh wait, Miley Cyrus!!! Miley will have a coronary if Jennifer’s single during the next Hunger Games filming! If she thought Liam Hemsworth flirted with Jennifer before, I can’t wait to find out what she thinks if Jen’s single. You know what? Now I’m totally down for a single Jen. It has the makings to be a gossip lover’s dream!

Are you a fan of Jennifer Lawrence and Nicholas Hoult’s relationship or are you ready for Jennifer to move on? Who would you like to see her date next?