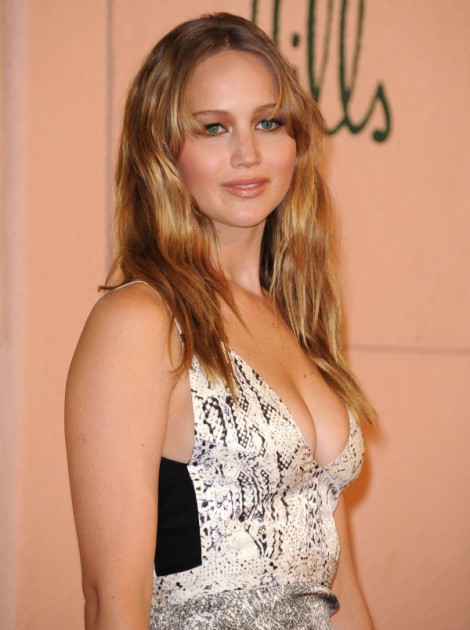 Well, Jodie Foster defended Kristen Stewart yesterday which means another female actress had to slap her back down again. Enter Jennifer Lawrence. Radar Online reports the Hunger Games star has been mouthing off about Kristen’s cheating scandal and has been tickled pink on the outcome the affair is having over her main competitor’s career.

Jennifer has a healthy rivalry with Kristen, but she thinks that the cheating scandal she got caught up in could have been avoided,” a source close to Lawrence revealed.

“Recently, although she didn’t say Kristen’s name directly, she couldn’t resist having a subtle dig at her rival. She told a group of friends that she would never two-time Nicholas. Jennifer then went on to say that she has received attention from many older men, especially powerful movie directors in the past, and would never want to jeopardize her career by getting involved with a married man. She was clearly referring to Kristen’s liaison with Rupert,” the source said.

As RadarOnline.com previously reported, the bitter rivals were recently embroiled in a battle for the lead role in the big screen adaptation of William Styron’s novel, Lie Down in Darkness.

This time, it was Kristen that was rubbing her hands with glee as she beat her nemesis to the part. It was much needed relief for the 22-year-old actress after suffering the fallout for her affair with married Snow White and the Huntsman director Rupert Sanders.

“Kristen is obviously down about what happened with her and Robert Pattinson, but she was thrilled when she found out she beat Jennifer Lawrence to a movie role,” a source told RadarOnline.com “She is insanely jealous of Jennifer, not just because she feels The Hunger Games has stolen some of Twilight’s thunder, but because everyone was talking about her as such a beautiful actress. Kristen has never been comfortable in her own skin and feels threatened by Jennifer’s good looks. And the thing with Jennifer is, she isn’t just attractive, she’s a talented actor. Jennifer’s a threat to Kristen, she’s only a year younger, so chances are they will continue to battle it out for the same movie roles. The pair of them are very competitive too; they won’t give up any future roles without a fight,” the source said.

OK, let’s start by rolling our eyes at Radar’s headline. Nothing makes my skin crawl more than the words “Meow!” insinuating a chick fight. Grow the f-ck up boys. This is the type of gossip trash that drives me crazy! Yes, even I have standards. I don’t believe for a second that Jennifer Lawrence bashed Kristen. Do you remember how freaked out she was last time the media tried to pit the women against each other when the Hunger Games first came out? Jennifer actually contacted Kristen to reassure her she never said anything negative and Kristen was all like, “Welcome to the sh-t storm that is Hollywood, dude.”

I have no doubt these girls compete. They aren’t besties, probably because they’ve never been around each other long enough to become so, but that doesn’t mean they hate each other. Was Jennifer pissed she lost out in Lie Down in Darkness? Hells yes. She really wanted it. But there’s no angel and no saint here. People are flawed – especially in their early 20s. It annoys me that the tabloids are using Jennifer to create this story.

Why the double standard? Well, Kristen is a dumb ass and she’s reaping what she sowed right now but I have made an effort to point out the public dumping is getting ridiculous. Also, I love Jennifer Lawrence. Kristen Stewart has her moments but you can always count on sense to come out of Jennifer’s mouth. She’s fun and normal and talented as all hell and refuses to starve herself for roles which I appreciate. That’s why I don’t believe this gobbly gook. Jennifer’s a real person. I’ve never seen her pull a diva move like Lindsay Lohan or act anything other than grateful to be eating at the table. She wouldn’t go there with Kristen. I think she’s smart enough to know today’s golden child is easily tomorrow’s tabloid fodder. No one gets a free pass.

Now, having said that. Do I think Jennifer has had her opinions on the Kristen situation? Naturally! I bet Jesus H.  Christ himself would cast a comment on this scandal. But I don’t think she was dumb enough to do it in such a public way or let anyone other than her mom know her true feelings. This “source” is questionable for sure.

So I will not believe this story. I will not. And I urge you not to as well. There’s plenty of room in Hollywood for many great actresses. Monopolies aren’t good for competition and they aren’t American! If anything, the women probably appreciate each other because they force the other to work harder. Jennifer is the Borg to Kristen’s McEnroe; the Serena to her Venus; the Nadal to her Federer (I really like tennis).

Let’s cut the girl on girl sh-t. Kristen’s situation is so messed up on its own, making up rumors is just plain lazy. Does it bother anyone else? Can anyone see Jennifer really making these comments?