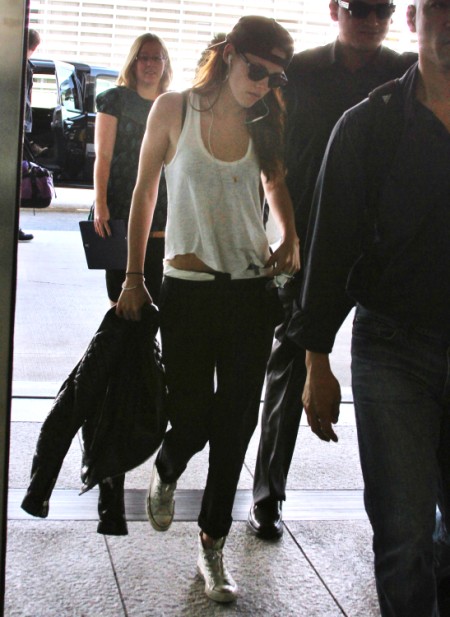 The hate keeps coming for Kristen Stewart but this time it didn’t hide behind a computer screen. According to the National Enquirer, Kristen was physically attacked and chased recently while working in LA. People are so freakin’ stupid. Here’s how it allegedly went down.

“The first attack came when she was exiting an office building in the San Fernando Valley – two young women came running at her, screaming that she was a ‘cheating villainess’ and ‘lying b****,’'” a source said. “Kristen, who was alone, made a beeline for her car, jumped in and slammed the door shut. But these vicious girls grabbed the door handles and began rocking the car back and forth. Kristen burst into tears, hit the accelerator and sped away. But the attack really shook her up! That’s when she hired her bodyguard/driver – who’s got orders to pull right up to the door of wherever she’s exiting so she can hop in fast!”

I’m surprised it took her so long to hire a bodyguard. You’d think she would have had one on speed dial ever since the first Twilight and all its madness erupted. But there weren’t pictures of her dry humping a guy other than Robert Pattinson all over the place at that time. I have a hard time with this story though. When I’m in a fit of rage I’m never so eloquent. “Cheating villainess” doesn’t roll trippingly off the tongue at any point in my day and I doubt it does for psycho Twihards either. And if this happened out in the open by an office building there had to have been more sources to confirm or deny.

Having said that, I bet Kristen thinks something like this could happen to her. The hate has died down but it’s not gone. I wouldn’t travel alone too often if I were her. There are crazies out there! But maybe this is why she snaps at bodyguards and freaks out at Rob during meetings. She has to deal with sh-t like this on a daily basis! It might not all be girls rocking her car but the name calling and stares are probably in full force. Again, people are stupid, Kristen should know that and act accordingly.

Do you think it’s wise Kristen got a bodyguard? Do you honestly think something could happen to her based on the reactions you’ve seen?